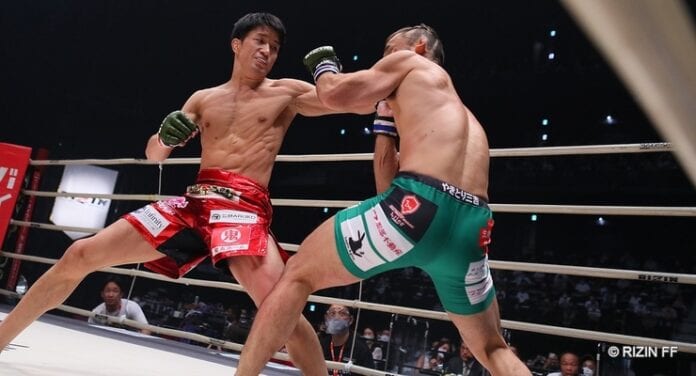 This year has no doubt been a test for everyone worldwide, but thankfully, for MMA fans, RIZIN FF will still send the year off with one of their epic New Year’s Eve shows.

Headlining RIZIN 26 is a bantamweight title clash that sees defending champion Kai Asakura taking on Kyoji Horiguchi. This fight will be the second meeting between the pair after Asakura defeated Horiguchi, who was the then Bellator and Rizin FF champion, in the opening round of their non-title clash at RIZIN 18.

The 27-year-old Asakura is one of RIZIN’s biggest stars and is coming into this fight on the back of two first round stoppage wins. He is confident that his skills have improved immensely since he and Horiguchi last fought back in August of 2019.

“I’ve put on some muscle, so adjusting my weight cut has been a challenge, but I think I have it figured out. Everything about me has gotten better, and I want to show that in my fight. I will make a statement in this fight,” Asakura said, speaking to media ahead of his fight.

Since his loss to Asakura, Horiguchi has not fought. This is mostly due to him undergoing surgery on his right knee. The recovery time took longer than expected, and it was during this enforced layoff that he decided to vacate both his Bellator and RIZIN championships.

“I started sparring and training fully in July. I feel like I am close to 100%. I’ve been adding new stuff to my original style during this period. I never think about the fight until right before the fight, so things are as usual. My absence from the ring really doesn’t affect me,” Horiguchi said.

Horiguchi went on to say that once he reclaims the RIZIN bantamweight title, he will set his sights on recapturing the Bellator strap. However, Asakura feels that he will have the answer to whatever questions his 30-year-old opponent poses when they meet.

“He can’t change his style that easily. I know what he’s capable of doing, I can adjust to any changes that he may bring to the fight. I think this fight will be seen by many top fighters, so this is a great opportunity for me to show what I can do.”

One fighter who should be watching tonight’s matchup is Bellator’s current bantamweight champion, Juan Archuleta. Asakura, like Horiguchi, has designs on competing for the Bellator strap.

“I plan to defend my belt against Horiguchi and then go after the Bellator belt,” Asakura exclaimed.

For MMA fans the Asakura-Horiguchi rematch is shaping up to be the perfect way to see out what has been the most challenging year in the sports history.

RIZIN 26 will be held on December 31st at the Saitama Super Arena. The event will stream internationally with English commentary by Frank Trigg and Joe Ferraro from the following link.