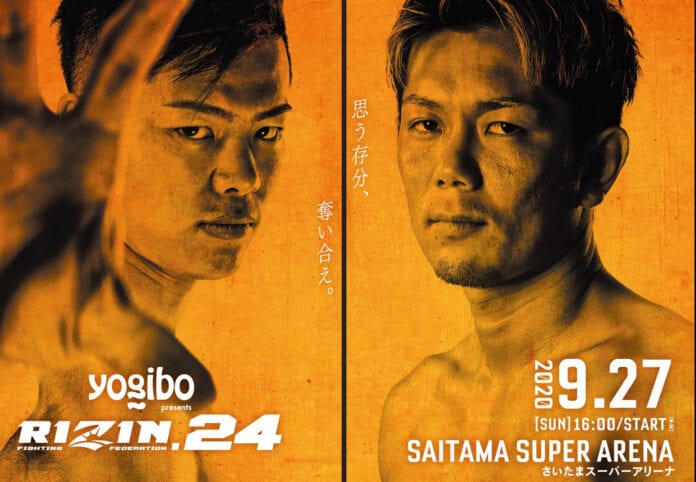 It’s a big weekend for Japanese MMA fans with RIZIN 24 going down on Sunday, September 27, in Tokyo, Japan. This weekend’s event will also see 5000 fans in attendance. The Japanese government still has regulations on how many people can be at an event, but 5000 is a huge step up from having to stage shows behind closed doors.

The 11-bout card contains several exciting matchups. However, it’s the main event that will generate the most interest as it features the return of kickboxing superstar Tenshin Nasukawa. The 22-year-old’s most recent promotional outing was on New Year’s Eve at RIZIN 20. It would be fair to say that the world has changed a lot since then, but what hasn’t changed is the hype surrounding a Nasukawa fight. Thankfully, this weekend’s bout is well worth the wait, with Nasukawa facing off against Koji Tanaka in a catchweight bout.

Tanaka — more commonly known as Koji — is a veteran of the Japanse kickboxing scene, and has racked up multiple titles throughout his career. The 31-year-old , who will be making his promotional debut, is an elite kickboxer and comes into this fight riding a three-bout winning streak.

RIZIN 24 also sees the return of fan-favorite Rena. The 29-year-old last fought at RIZIN 20, where she defeated the USA’s Lindsey VanZandt via third-round TKO. The 29-year-old will take on Emi Tomimatsu, who will be making her first appearance under the RIZIN banner.

If you are in the mood for a fight heavy on the spectacle, then the bout between Sudario Tsuyoshi and Dylan James is the one for you. Both men will be making their MMA debuts, with Tsuyoshi coming from a sumo background, while James comes from All Japan Pro Wrestling.

International fans can watch the event via PPV by clicking on the following link [RIZIN 24], which contains all the info you need to know.

Check out the full card below.