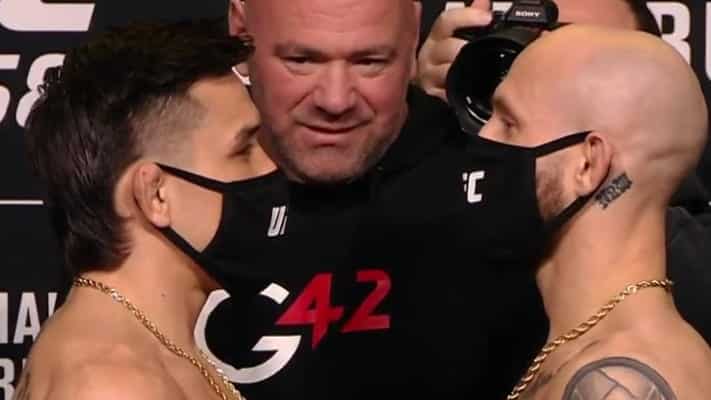 Next up on the UFC 258 main card is a bantamweight bout between Ricky Simon and Brian Kelleher.

Round 1: After some left hooks from both, Simon level changes and takes Kelleher down in the center of the Octagon. Kelleher scrambles to the side of the cage but is still controlled by Simon. Kelleher appears to be bleeding badly on his face but it’s not known how it happened. Simon takes him down soon after he gets up and is in half guard now. Simon appears to be going for an arm triangle choke but Kelleher escapes. Joe Rogan reveals it was an elbow that led to Kelleher’s cut. Simon takes his back but Kelleher escapes and the fight is standing again. Simon gets another takedown and goes for another arm triangle choke. Kelleher escapes but he is breathing heavy this time as he does it. The fight returns to striking. Both fighters exchange leg kicks. Simon ducks a left hook as the round ends.

Round 3: Simon connects with a leg kick. Kelleher blocks a high kick and then misses his own. Simon throws a number of up elbows while striking. Kelleher misses a spinning elbow and sees himself controlled by Simon again who has his back up against the fence. Simon takes him down. Kelleher seems to be going for a kimura but is countered by a kimura attempt of Simon’s which causes him to scramble. Kelleher gets up but is controlled by Simon again who takes his back. They separate. Kelleher lands a front kick to the body. The fight ends.