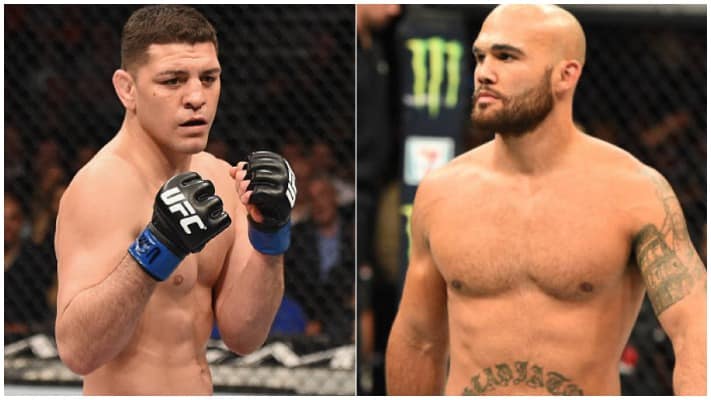 Nick Diaz is set to make his eagerly anticipated return to the Octagon at middleweight.

According to MMA journalist, Ariel Helwani Diaz has seen his UFC 266 rematch with Robbie Lawler bumped up to 185lbs just days out from the event. It is unclear why we have a last-minute weight change or what side initially requested it. The fight will remain only the second to take place over five rounds when not a scheduled main-event or title fight.

The former Strikeforce champion appears to be in fantastic shape for his MMA return that is more than five years in the making. Diaz has not fought since dropping to a decision defeat to Anderson Silva at middleweight in 2015. The result was later overturned to a no-contest when ‘The Spider’ failed his post-fight drug test.

In September 2020, Diaz took part in a successful test weight cut. After so long out of action his team wanted to prove he can still make welterweight ahead of fight talks with the UFC.

“This is Nick Diaz earlier today,” Helwani wrote on Twitter last year. “He weighs in the 175-165 pound range, per his manager Kevin Mubenga. He just completed a 14-week diet and training regimen. This is the first time he cuts weight in approximately four years, Mubenga said. Diaz wanted to do a test cut because … he is keeping a close eye on the big welterweight fights coming up. He is “100%” planning on fighting again, per Mubenga, and is targeting an early 2021 return.”

Lawler has remained active during his rivals’ time away from the sport. ‘Ruthless’ is no longer at the peak that saw him become the UFC welterweight champion and has lost his last four fights. However, he has been getting in with the best fighters in the world on a consistent basis and seems to have little trouble making the welterweight limit.

Who do you think requested this fight take place at middleweight? Nick Diaz or Robbie Lawler?