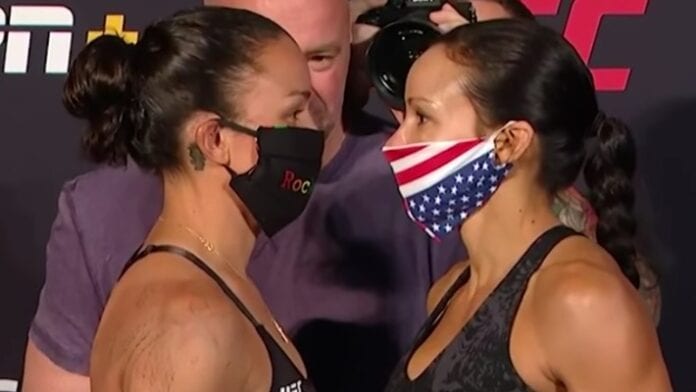 Next up on the UFC Vegas 3 main card at the Apex facility is a women’s bantamweight bout between Raquel Pennington and Marion Reneau.

Round 1: Reneau is employing the jab early on. Pennington blocks a head kick. She lands a nice elbow soon after. Pennington clinches Reneau up against the fence. She lands some knees before they separate and return to striking. Reneau looks to land some strikes but is clinched up against the fence again. Reneau reverses as they exchange knees to the belly. Reneau gives up her back in the exchange. However, she reverses and has Pennington’s back until the round comes to an end.

Round 2: Reneau continues to push forward and land combos. However, she finds herself in the Thai clinch by Pennington who lands a number of good knees to the belly. The fight is momentarily stopped after Reneau lands a knee to Pennington’s crotch. The fight resumes and Pennington is much more aggressive now with her strikes. They clinch up again and exchange knees. Reneau manges to take Pennington down but the latter escapes and is now on top of Reneau. Pennington looks to land ground and pound but gets up before unloading on Reneau again as she gets up as well. Reneau is clinched up against the fence again. They both exchange elbows which connect. Pennington looks for the takedown but Reneau defends it before the round comes to an end.