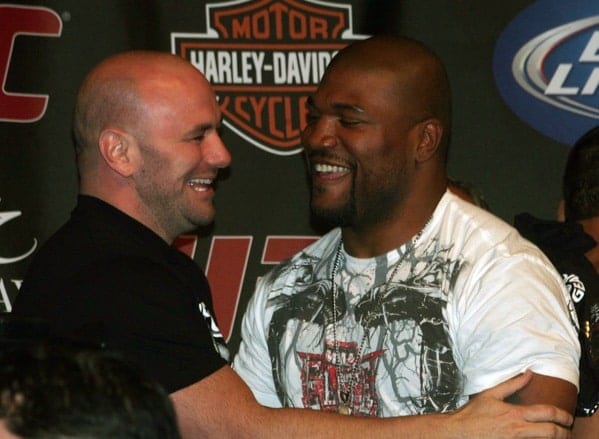 After a highly publicized contract dispute, former UFC light heavyweight champion Quinton “Rampage” Jackson was forced off of this Saturday’s (April 25, 2015) UFC 186 pay-per-view when a New Jersey Superior Court judge ruled that he was in breach of his Bellator contract.

Jackson and his legal team planned to file an appeal, and this evening news has come that it’s apparently worked. According to a report from ESPN’s Brett Okamoto, Jackson is back on the card and will face Fabio Maldonado in the co-main event from the Bell Centre in Montreal as originally planned:

Rampage Jackson back on UFC 186. Will fight Maldonado at 215-pound catchweight. Bosse off the card, will be paid. http://t.co/EL7ZmWc6Wa

Fan favorite Brazilian slugger Maldonado found a new opponent in former hockey player turned fighter Steve Bosse, who will now apparently be paid his show money for being willing to step in on short notice.

UFC President Dana White, who was ‘surprised’ to hear that Rampage was unable to compete for the UFC after he supposedly assured them he was free to negotiate, issued the following statement:

“We are happy with the decision from the New Jersey court allowing Rampage to fight in Montreal this Saturday night,” White said. “”I am looking forward to seeing Rampage back in the Octagon.””

Bellator also issued a response expressing their disappointment in a press release:

“We are gratified that the Appellate Division did not disturb part of the Chancery Division order enjoining Jackson, but are disappointed that they reversed the injunction as to the April 25 fight,” a Bellator official stated in a press release. “We continue to believe that Judge Suter’s decision was thorough, well reasoned and correct, and are evaluating our options.”

Jackson’s fight with Maldonado will be contested at a 215-pound catchweight instead of the original 205-pound limit given the timeframe of the messy situation.

An MMA legend in his own right with highlight reel finishes dating back to Pride FC, Rampage has been out of the Octagon since UFC on FOX 6 in early 2013. He’s since won three straight bouts in Bellator and will be looking to put on a show in the Octagon once again.

That begins this Saturday in Montreal, surprisingly enough.