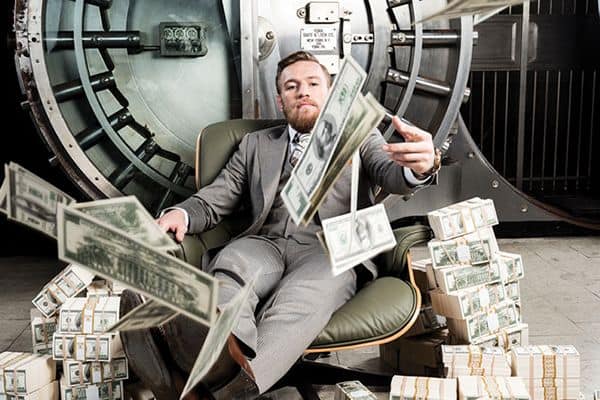 The UFC needs him back in the cage immediately, but any real news about Conor McGregor‘s supposed MMA return is difficult to find these days.

The former lightweight and featherweight champion is awaiting a court date in July to sort out assault charges stemming from his April 5 attack where he threw a dolly through a bus containing current UFC 155-pound champion Khabib Nurmagomedov, an incident for which he’s expected to ultimately not serve any jail time.

When that’s finally said and done, McGregor is expected to return for a massive megafight with “The Eagle,” although many are questioning if it will happen due to “The Notorious'” actions following his reported million payday to box Floyd Mayweather last summer. However, he lives an extremely lavish lifestyle where even that much cash is drained quickly, so at least one person close to the situation thinks McGregor will have to return soon.

Khabib’s manager Ali Abdelaziz recently told TMZ Sports that McGregor is running low on income and has “agreed” to fight Nurmagomedov for that one reason. If he does, Abdelaziz said they would contribute to his monetary gains because they owed him something:

“Conor’s running out of money. This is why he agreed to fight Khabib.

“It’s okay,” Ali says … “We’re gonna contribute of him making some money, but at the end of the day we owe him an ass whooping. He needs to get his ass whooped from Khabib.”

There’s no doubt ‘The Notorious’ lives an expensive lifestyle, recently purchasing a plush home in Spain and flaunting his wealth all over social media more than he’s actually been fighting of late. Spending aside, it’s tough to imagine that the UFC’s biggest star is actually running low on money.

But Abdelaziz insisted it is indeed true, because McGregor has been spending at a record pace and didn’t take home as much from the Mayweather fight as it seems:

“It’s not [expletive], it’s true,” Abdelaziz said of his claim that McGregor is running out of money. “I talked to someone who told me, he flies that private plane around everywhere and it costs $200,000 just to start that thing up. And he made that hundred million against Floyd, but he didn’t get all that. After the taxes and he paid everybody, it was $50 million, or a little less.

The outspoken representative then gave a take on McGregor’s so-called attitude of being a ‘gangster’ by claiming it never ends well for those kinds of men:

“He thinks he’s a gangster,” Ali says … “I don’t think he is. But, when you think you’re a gangster, you’re going to get treated like a gangster. And gangster, they end in jail or get beat up.”

Abdelaziz’s words suggest he’s trying to goad McGregor out of hiding, something he’s only done for his court date recently. Talk continues to swirl about his anticipated match-up with Nurmagomedov from both sides, but at this point, that’s all it is – just talk. The UFC and its fans could definitely use a fight of that magnitude as pay-per-view sales have dried up to frighteningly low levels of late.

But both sides have begun ramping up discussions of the fight, and it does have some possibility of being booked soon, at least hopefully. Three dates are being targeted according to Abdelaziz – October’s UFC 229, November’s UFC 230, and late December’s UFC 232, yet he didn’t believe he would be able to get licensed for UFC 230 due to the fact it will happen in New York City, where he is facing charges.

Seems like a lot of red tape remains for MMA’s biggest fight to get booked. It won’t be for a lack of trying to make it happen from Khabib’s camp, however.