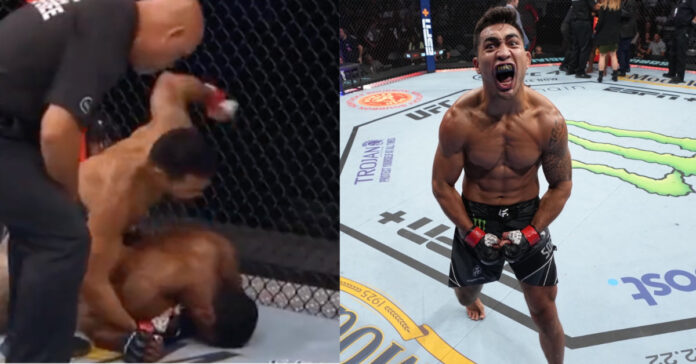 Punahele ‘Puna’ Soriano landed a huge left hand to send Dalcha Lungiambula falling to the canvas, before following up with brutal ground and pound, securing a second-round win in the featured preliminary bout of UFC Long Island.

‘Puna’ Soriano struggled in the first round of the fight, as Lungiambula’s power and raw aggression saw him pull ahead. However, at the end of the first round, it became apparent that Lungimabula had sustained a rin injury, as it was visibly protruding.

In the second round, Soriano didn’t let his opponent stick around and continue his success. ‘Puna’ countered a kick with a monstrous left hand that crumpled ‘Champion’ to the canvas. Ground strikes ensured the referee stepped in, as the hard-hitting middleweight picked up yet another KO victory.

Below, catch the highlights of ‘Puna’ Soriano’s second-round KO win over Dalcha Lungiambula: