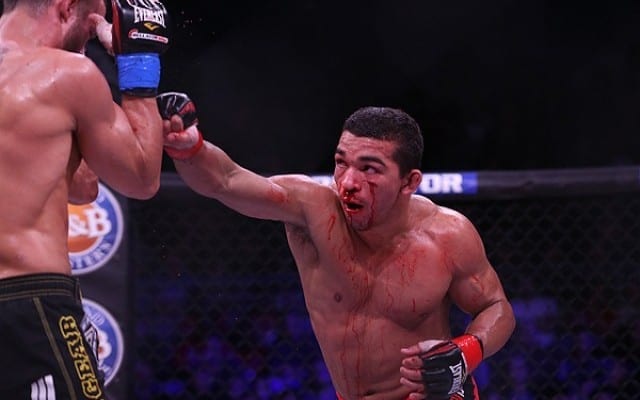 Bellator featherweight champion Patricio Freire will put his belt on the line this Friday night (June 19th, 2015) as he faces hungry contender Daniel Weichel in the co-main event of Bellator 138. The show is set to go down in St Louis, Missouri, and features a seven-year grudge match in the main event. Ken Shamrock, the former UFC Superfight champion, will go up against his old rival and former youtube brawler Kimbo Slice at the head of the card, with the featherweight championship fight playing second fiddle.

This isn’t the first time that Bellator has put a ‘grudge’ match in front of a title fight, as you’ll remember Tito Ortiz and Stephen Bonnar headlining Bellator 131 ahead of the interim lightweight championship fight between Will Brooks and Michael Chandler. ‘Pitbull’ is only too aware of this fact, and speaks to MMAJunkie.com about his feelings towards Shamrock vs. Slice playing the main event:

“The positive side is the position this organization is in right now, they’re trying to create a new image for the brand and make is visible for the casual fans. Shamrock and ‘Kimbo’ bring that. I realize that side of the promotion, and I understand it.”

Bellator’s ‘pro wrestling’ style of promotion does little more than bring silly media their way, but media nonetheless and just about everyone is talking about Shamrock vs. Slice, whether it’s for the ludicrous interviews, or the controversial pictures, it’s being talked about in the MMA (mixed martial arts) world. The question is would this entire card be in the limelight had Freire and Weichel been headlining? Moving on, ‘Pitbull’ discusses Weichel:

“He beat a very tough Pat Curran, but I think the beating I gave Curran was so big that he didn’t return to the fighter he was,” Freire said. “I hope he can return to that, but it was a very good win for Weichel. It proves he belongs and deserves this title shot.

“I don’t think he does (anything I haven’t seen). I’ve studied his fights, and I think he has a lot of weaknesses, especially standing. If he goes to the ground with me, we already know what’s going to happen.”

30-year old BJJ (Brazilian Jiu Jitsu) black belt Weichel (35-8) is currently on a seven-fight win streak, most recently edging Pat Curran on the judge’s scorecards at Bellator 133. Curran and a 2006 win over Dennis Siver are really Weichel’s biggest claims to fame, and during those fights Freire feels the former M-1 lightweight champion hasn’t shown anything that can surprise him at Bellator 138:

“I’ve stopped looking at rankings; right now I only care about destroying my opponent,” Freire said. “I’m going to remain doing that, and it doesn’t matter anymore what anyone thinks. It only matters what I know, and I know I’m the best.

“Coming into to fight me, I know (Weichel) doesn’t have anything to offer me or surprise me. I’m going to beat him everywhere the fight goes.”

Main event or not, the Brazilian featherweight champion has a point to prove. It would be hard to argue against him headlining the next card should he turn Weichel away on friday night, but who knows what Scott Coker and co. have in line for the next big event….