It’s safe to say that the welterweight title bout between Tyron Woodley and Stephen “Wonderboy” Thompson (highlights here) in the main event of last night’s (Sat., March 4, 2017) UFC 209 from T-Mobile Arena in Las Vegas, Nevada, didn’t deliver on the momentum created by their “Fight of the Night”-winning first fight at last November’s UFC 205.

It was a largely cautious bout where precious little action was seen from both men until a furious late onslaught from Woodley that most likely earned “The Chosen One” the controversial majority decision after their first fight was ruled a majority draw. Many, including himself and UFC President Dana White thought Thompson, although not doing as much as he could have, outworked Woodley outside of a third-round takedown and some ground and pound, controlling the Octagon and landing more and better shots standing up.

But the judges didn’t feel that way, and one judge, Sal D’Amato, gave Thompson three of the first four rounds only to give Woodley a 10-8 score in the final frame to make the fight a majority draw, something White called insane. The result was a fitting end to a strange and disappointing fight week, and ‘Wonderboy’ is left to wonder what could have been had he been able to take the judges out of the equation.

How did you score the close, technical title fight. Take a look at how the cageside judges scored it last night and see if you agree: 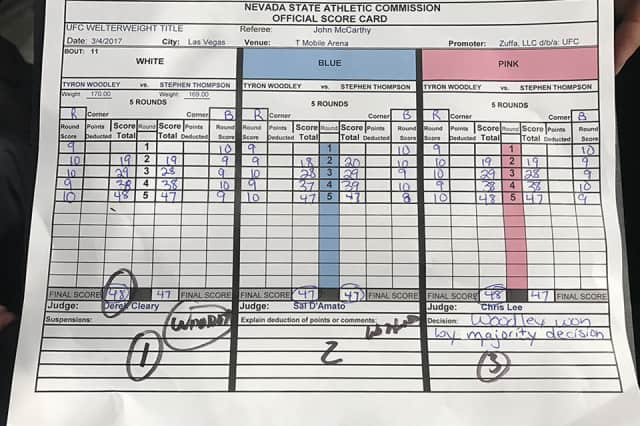