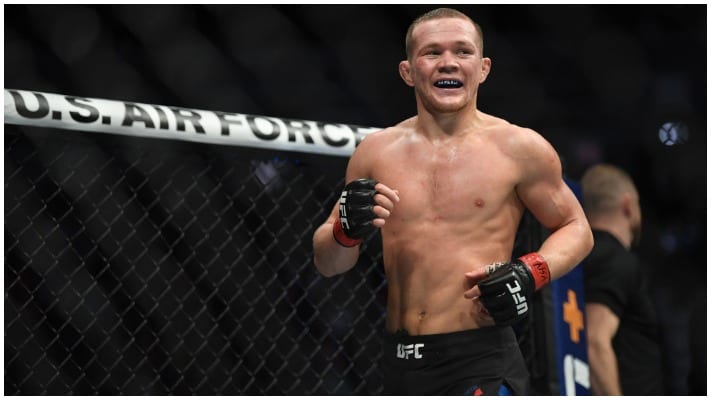 A new chapter was included in the history of UFC when on Saturday, Petr Yan became the first champion to drop his title because of disqualification. Yan’s bantamweight bet went to Aljamain Sterling when he illegally hit him on the head with his knee during the fourth round of the fight. That kind of strike was illegal since Aljamain Sterling was on the ground. However, the strike was forceful enough to restrict Sterling from continuing the match, which eventually brought disqualification to Yan, making Sterling the new owner of the 135-pound champion’s title.

Now, from all across the MMA community, various reactions are coming. While some are leaving it after mere commenting on Saturday’s match, some are positively criticizing the costly error Yan has made. Alongside that, some are even reproving Sterling’s incapability to carry on with the bout, raising questions like whether it should even be illegal to apply leg strikes on opponents when they are in grounded positions.

In such a scenario, Jon Jones, former heavyweight champion, said a few words to support and complement Sterling’s win in a very unobjectionable manner. According to him, Aljamain appeared in that fight in great shape; he kept his forward position throughout the entire war. And, it was not his fault to be illegally kneed. He also added a few more words for congratulating the new champion.

However, Yan didn’t positively receive this message and responded, saying that Jones should also have dropped the title against Anthony Smith in UFC 235 out of disqualification. He also wrote that Anthony Smith should have been the owner of his title.

The sports bettors wagered backing Petr Yan also had to experience unfortunate loss because of Yan’s sudden fault. However, gamblers wagering on online casinos are quite reluctant to think about this matter as they wager money on games they play on their own. And the casino they choose and their gambling skills are the only responsible entities for their winning and losses. Hence, instead of wasting your time tuning levers of land-based slot machines, you could always try an online casino offering the best gaming options with lucrative bonuses and promotional offers to extend your winning voyage longer.

However, when it comes to prohibited strike drama, Jones also had to go through his own against Smith two years back. In a very similar way with Saturday’s fight, Smith was hit on his head by Jones’s knee. That pushed the match towards a long pause while the possibility of Smith’s winning by Jon’s disqualification was also evident. However, Smith was fit enough to continue with the match, but he lost the fight to Jones because of a unanimous decision.

However, after the match, Jones congratulated Smith for showing that he has the heart of a lion. If Jones were disqualified at that match, it would have been his second one as in 2009; the former champion lost a game against Matt Hamill due to disqualification. In that match, Jones shook Hamill by 12-6 illegal strike with his elbows. And that loss is the only defeat the former heavyweight champion has noticed throughout his 28-year UFC career.

However, adding his point of view on the notion that Smith should have been declared the champion after Jones’s disqualification, Smith said that anyone who thinks the same is nothing but a mere coward.

But, it wasn’t only Jones’s comment that came into Yan’s attention. After Sterling’s victory, Merab Dvalishvili shared a picture on social media where they are seen swimming. Yan added an obscure comment saying that he is delighted to see the champion is fair now.