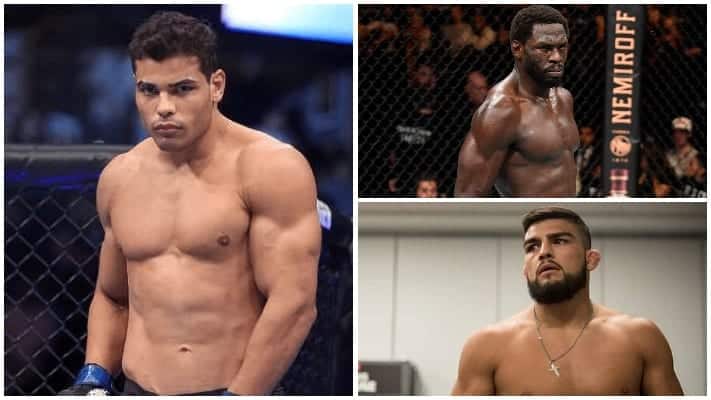 Kelvin Gastelum has stepped up to fight Jared Cannonier on August 21 after Paulo Costa withdrew from the bout in what appears to be a protest about pay.

“Per sources, Paulo Costa has withdrawn from his main event against Jared Cannonier on Aug. 21. Kelvin Gastelum (@KelvinGastelum) has agreed to take his place,” Okamoto wrote.

‘Borrachinha’ later claimed he had never signed to fight Cannonier in August and wouldn’t be doing so as the UFC refused to pay him main event money.

“UFC needs to pay me as main fighter to have fighting in main events. Youtubers are showing all disgrace on this business,” Costa wrote on social media. “Just to be clear. I never signed or locked up that contract. Why ufc announced this fight if didn’t signed? My question too”

In steps Gastelum, who is making a habit of replacing Costa in main event slots. Earlier this year the Ultimate Fighter winner fought Robert Whittaker on short notice after the Brazilian withdrew due to illness. On this occasion, Gastelum will get pretty much a full camp to take on the middleweight #4, Cannonier.

Gastelum is in a poor patch of form. The former interim title challenger has lost four of his last five UFC bouts, with his only win coming against Ian Heinisch who is no longer ranked at 185lbs.

Cannonier seemed to be heading towards a middleweight title shot before he fell short against Whittaker last time out. ‘The Killa Gorrila’ was outpointed over three rounds by Whittaker in a defeat which ended Cannonier’s perfect run since dropping down in weight. The 37-year-old had picked up three consecutive TKO wins before he ran into the former champ.

Do you think Paulo Costa made the right call by withdrawing from his proposed August 21 fight with Jared Cannonier?