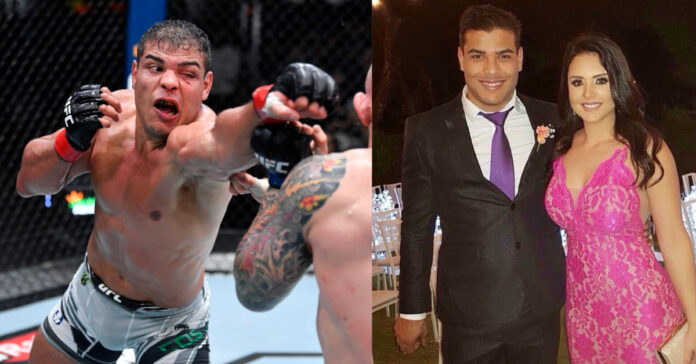 Ahead of his upcoming UFC 278 co-headlining return later this month, Paulo Costa has cordially parted ways with manager, Wallid Ismail – following in the footsteps of his compatriot, Deiveson Figueiredo. And his partner, Tamara Alves, will now represent the Belo Horizonte native.

Costa, the current #6 ranked middleweight contender, is slated to co-headline UFC 278 in Salt Lake City, Utah later this month opposite former division champion, the returning, Luke Rockhold. The pay-per-view event will be headlined by a welterweight title rematch between Kamaru Usman, and Leon Edwards.

Last featuring in the main event of UFC Vegas 41 in October of last year, Paulo Costa suffered a unanimous decision loss to Marvin Vettori – in an impromptu light heavyweight clash.

The defeat came as just the second of Costa’s professional career, after the Brazilian unsuccessfully pried the middleweight title from Israel Adesanya in September 2020, suffering a second round knockout loss on ‘Fight Island’.

Ahead of his return on August 20. against Rockhold, Costa confirmed he had amicably parted ways with Ismail for representation, with the aforenoted, Alves now handling Costa with immediate effect.

“I have nothing bad to say about Wallid (Ismail),” Paulo Costa said on his official YouTube channel. “He is an honest person and very professional. I just have compliments about him. We just have different views about my career and, because of that, we decided to not work together anymore.” (Transcribed by Sherdog)

11-2 as a professional, Costa began his Octagon tenure with a blistering run of five consecutive victories, besting Garreth McLellan, Oluwale Bamgbose, former welterweight champion, Johny Hendricks, and the recently retired, Uriah Hall. And in his most recent professional win, defeated multiple-time middleweight title challenger and now-Bellator contender, Yoel Romero back in August 2019. The outing earned both Costa and Romero a Fight of the Night bonus.