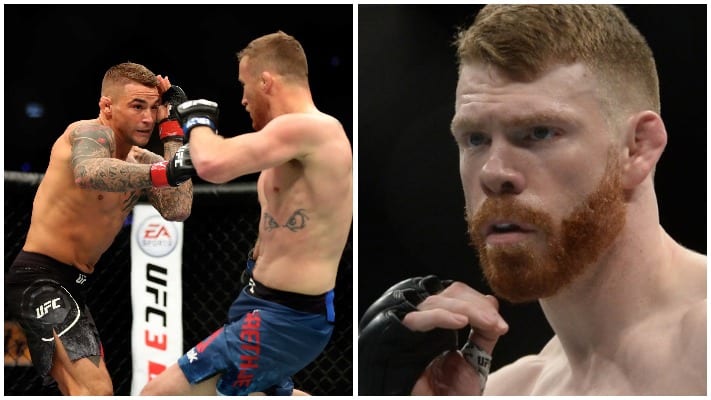 While he previously called for a trilogy fight with Edson Barboza, Paul Felder is looking ahead to the opponents ranked above him.

Felder is coming off a controversial split decision win over Barboza at UFC 242 earlier this month. As a result, he is currently ranked No. 7 in the lightweight rankings. The goal is to win a title and so, “The Irish Dragon” is focused on potential fights that can help him climb the ladder.

“I would say Justin Gaethje or Dustin Poirier [are my ideal next opponents] – Dustin because he just fought for the belt,” Felder said on the latest episode of MMA Fighting’s Eurobash podcast. “If I can jump the line and skip ahead like that – I mean, sh*t. And he’s a great striker, a great boxer. That lends itself to the kind of fights that I’m used to being in and one that the fans want. Whatever happens, we’re probably getting a bonus. It would be one of those fights that goes back and forth. [It would come down to] who’s tougher and who can take the bigger shots, and those are the fights that turn me on.

“Justin is just a savage, man. Like I said, I don’t call this guy out because I have anything against him. You just saw what he did to one of my friends, ‘Cowboy.’ I would love to get in there and test myself, because I do feel that the guy is going to be fighting for a world title some day. These are the guys you have to beat. You have to beat the toughest guys out there, because if I can’t beat these guys, I’ll have no chance against Khabib – he’s able to out-wrestle everybody.”

Felder is also interested in bouts with Al Iaquinta and Conor McGregor. But given that Donald Cerrone and him are training partners, that fight is out of the question.

And when it comes to McGregor, Felder is not the kind to beg for it:

“Fight [Conor McGregor]? I wouldn’t mind it,” Felder added. “I like making money – plus he’s up there. He’s got numbers next to his name that I want to take. If you wanna talk about that fight, you know it’s going to be goddam striking battle with me, and Conor is obviously not going to be trying to take me down either.

Who do you want to see Felder fight next?