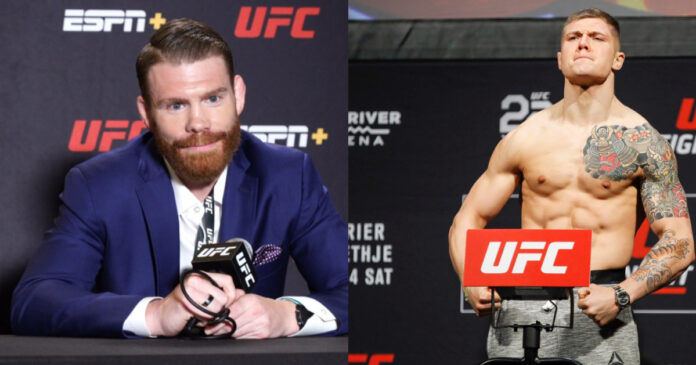 When UFC fighters (or commentators) engage in public online back-and-forths, it is likely at some point their paths will eventually meet and that’s exactly what happened when Paul Felder and Marvin Vettori met up last year.

During an appearance on The MMA Hour, Felder recounted an incident when he and Vettori had to talk out there after a Twitter spat. Vettori had been very critical of Felder’s commentary when calling a fight between his teammate, Nasrat Haqparast and Dan Hooker.

Vettori had initially written: “Had to mute the comment on the fights, can’t stand Felder lol worst to ever do it”, to which Felder had responded: “Am I using too many big words? I’m sorry Marvin.”

The pair continued to engage in a back-and-forth, with Vettori calling Felder a ‘puppet’

“They were like, ‘Guys, OK, before we start, I know there’s been back and forth, we’re going to handle this like adults – you guys feel free to vent both sides of your story,’” Felder said on The MMA Hour. “Marvin gave his reasons on why he felt slighted and whatever, and I gave my reasons on why I didn’t think I did anything that was really against him, and we kind of hashed it out. And ever since, we’ve been… I don’t think he’s going to be my best friend or likes me necessarily, but I feel like there’s no real bad blood there.”

“At this point, if Marvin wanted to kick my ass, let’s be honest, he probably could,” Felder continued. “He’s a top middleweight right now, and I’m a very skinny former fighter who commentates and does triathlons on the side.” (H/T MMAFighting).