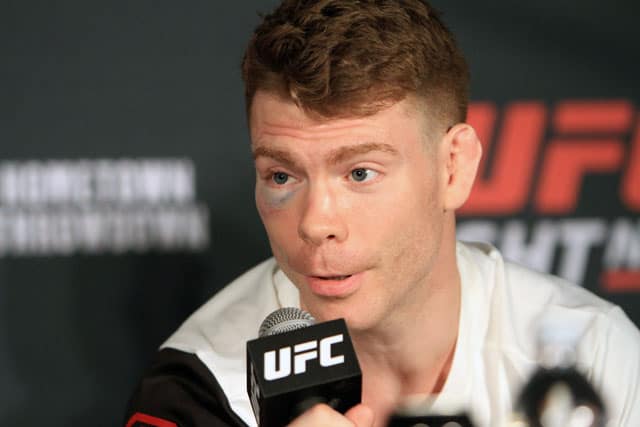 King of the spinning back-fist Paul Felder came up short in a UFC on FOX 16 lightweight collision with Edson Barboza this past July. The two entertaining strikers won ‘Fight of The Night’ honors for their three round burner, but for ‘The Irish Dragon’ the decision loss obviously hasn’t sat well. Felder was building a head of steam following a spectacular starching of Danny Castillo at UFC 182, and is clearly keen to blow out the cobwebs of his first professional loss.

Philly Sports spread the news that Ross Pearson will be facing ‘The Irish Dragon’ at UFC 191, meaning Felder will have fought twice between July 25th and September 5th.

Paul Felder is scheduled to fight Ross Pearson at UFC 191. From @veneziar: http://t.co/UKCqK09fIC

Ross Pearson is coming off a frustrating decision loss to Evan Dunham on July 18th, meaning he is only one week removed from Felder’s 40-day turnaround. ‘Real Deal’ has dropped three fights over the course of 12 months, the worst was a particularly brutal knockout at the hands of Al Iaquinta. He faces in Felder a tough question.

With Pearson struggling to keep gatekeeper status, and Renzo Gacie Academy stand-out Paul Felder having his hype train derailed, a win is crucial at this pivotal point. A loss is equally as influential, so expect heavy hands and spinning attacks at UFC 191.