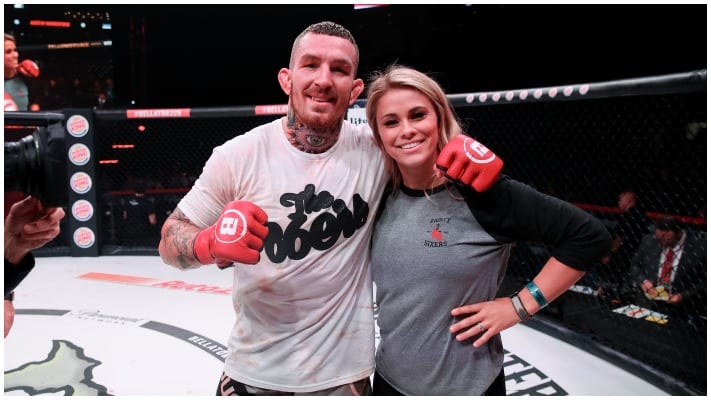 Paige VanZant shared that she only has one more fight on her Bare Knuckle Fighting Championship contract. She plans to possibly join Bellator where her husband also fights.

VanZant is coming off a 2nd loss in a row at BKFC where she lost to another former UFC fighter, Rachel Ostovich. She has since spoke out about how that fight against Ostovich has effected her mental health. The former UFC fighter and her husband (Austin Vanderford) both appeared on the ‘Punchin’ in’ podcast to talk about many things, including her future.

In the interview VanZant had this to say about her future in the fighting world, “That’s always on the back of my mind. I would love for us to fight for the same organization. I would love to fight for Bellator, they’ve treated him [Austin Vanderford] really well, especially now that he’s fought his way up to a title… I feel like it was good that we weren’t in the same organization because they couldn’t build him as a star by himself. He would be always kind of be in my shadow and I felt like now that I’m not with Bellator, he got to build himself up to a tile shot all by himself,” (H/T Sportskeeda)

Vanderford is currently next in line to fight for Gegard Mousasi’s Middleweight title. He has only had 5 fights in Bellator and his ascension has been relatively quick. He has gone from Mr.VanZant who got a shot on Dana White‘s Contender Series, to title challenger in no time.

VanZant has had her ups and downs throughout her career in the UFC and BKFC. Making the move to Bellator may be the best possible move for her. ’12 gauge’ also said in the interview that she expects to fight for 6 more years.

Does Paige VanZant fighting under the Bellator banner interest you?