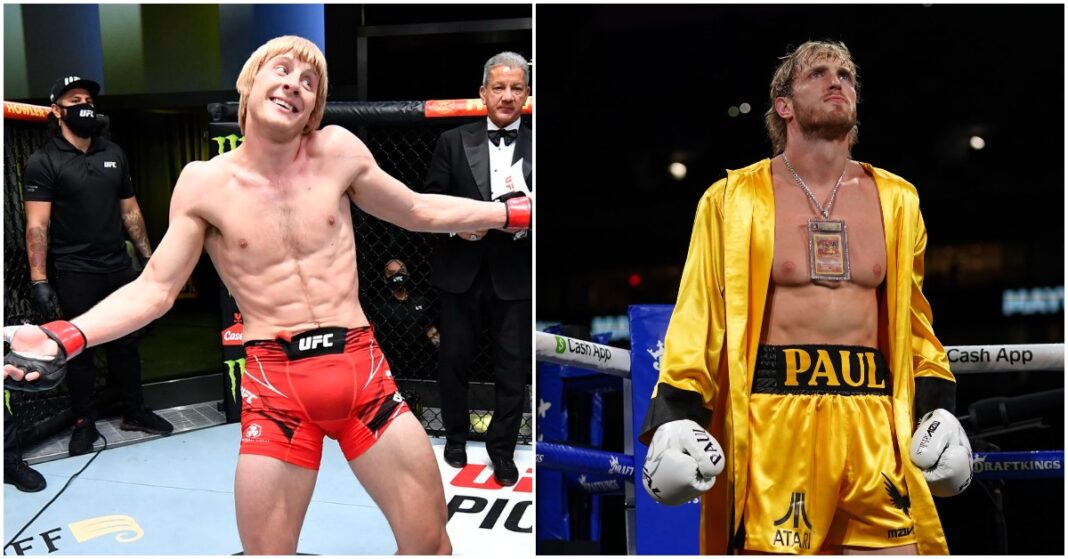 Rising UFC lightweight prospect Paddy Pimblett has been issued a warning that he could find difficulty submitting social media star Logan Paul if they were to square off in the UFC octagon.

After just two fights in the UFC, Pimblett has quickly become one of the fastest-growing stars under the promotional banner. The Scouser is coming off an impressive first-round submission victory over Rodrigo Vargas at UFC London where ‘The Baddy’ was met with thunderous support.

‘The Baddy’s’ newfound fame has brought with it a global spotlight, and one man who’s had his eye on Pimblett is a former opponent of Floyd Mayweather, Logan Paul. The social media personality and podcaster has famously tried his hand at boxing but now seems open to a switch to MMA.

“I’d like a win in some sort of a fighting, combat sport,” Paul said Via ‘The MMA Hour‘. “I think I’d be good at it, too. But then again, bro I’m like okay, do I fucking go and get my head kicked in or wrestle and have so much more fun.”

“But I found out who I’d like to fight if I did a UFC match, Paddy the Baddy.”

Although most would assume that Paddy Pimblett, a former Cage Warriors champion, and BJJ black belt would have no issue submitting or even beating Paul, not Chael Sonnen. ‘The American Gangster’  believes that Pimblett, whose wins are made up of 50% submissions, would struggle to submit Paul

“Logan is meaningfully bigger, his credentials in wrestling are very clear, says that he has done jiu-jitsu, but he’s got this great size advantage, the Paul brothers are legitimately tough guys,” Sonnen said via his YouTube.

“They can have this fun and go back and forth with Paddy but it will never happen within the UFC, but I will make the match right now. I’m not suggesting that Logan goes out there and beats Paddy, maybe he does submit him but size does matter.”