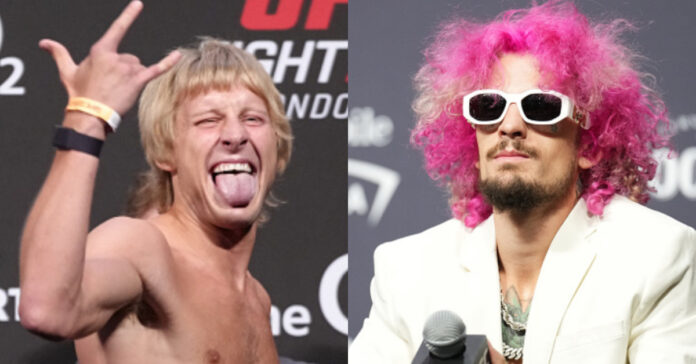 Two of the UFC’s biggest fan favorites finally met up in London ahead of the UFC’s return to the O2 Arena on Saturday.

Paddy Pimblett had the opportunity to meet fellow UFC fighter and social media star Sean O’Malley in a video posted on the UFC Europe Twitter account. Upon meeting ‘The Baddy’, Sean O’Malley asked the question that many fans have asked Pimblett over the years: “How the f**k you lose all that weight?”

Following his first-round knockout of Rodrigo Vargas in March, Pimblett documented his post-fight binge eating that caught the attention of fighters and fans. Pimblett gained an astonishing 47 pounds, ballooning up to 203 pounds. A far cry from the 156-pound weight limit for non-title lightweight fights in the UFC. On Pimblett’s YouTube Channel ‘BaddyTV‘ the Liverpudlian took fans on his journey of eating 10,000 calories to celebrate his second-straight win in the Octagon.

Despite his post-fight eating habits, Pimblett had no problem making weight for his return to London on Saturday. The scouser weighed in at 156 pounds for his third outing in the UFC against Jordan Leavitt. While speaking to the media in London, Pimblett had some choice words for his opponent at the O2.

“He’s p*ssed me off,” Pimblett said while speaking to reporters at the UFC London media day. “When the fight got announced, I really didn’t mind him. He had 12,000 followers, now he has 30,000 just off the back of my name, and the people who don’t like me. He’s got loads of followers just because people don’t like me. He can talk all the s*** he wants, but he knows full well that when that cage door gets shut, I’m going to take his head home with me.”

On the other side of the coin is ‘Sugar’ Sean O’Malley who is coming off of a disappointing appearance in the Octagon. At UFC 276, O’Malley was engaged in battle with Pedro Munhoz. Just over three minutes into the second round, O’Malley accidentally poked the eye of Munhoz causing a halt to the action. Munhoz was unable to continue and the bout was called off and ruled a no-contest.

While early opinions were that the two would run it back, Sean O’Malley has made much bigger plans. The colorful fighter announced on ESPN’s DC & RC that he will be facing No. 1 ranked bantamweight contender Petr Yan at UFC 280 this fall.

This is a massive step up in competition for Sean O’Malley whose most notable opponents to this point have been Marlon Vera and Pedro Munhoz. Needless to say, the announcement got MMA fans excited. O’Malley opened as a +300 underdog, an unfamiliar, but welcomed feeling by the Helena, Montana native.

“It’s the first time I’m going to be an underdog. I’m assuming I’ll be an underdog (he’s a 3-to-1 underdog), which is super cool. So I think it’s going to be a super interesting fight. He says he’s a master of boxing. I like to think of myself as a very, very high-level striker.”