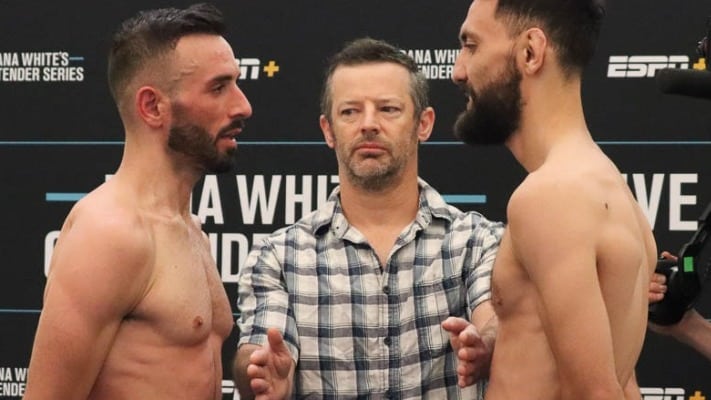 Things got heated between Israel’s Oron Kahlon and Afghanistan’s Javid Basharat during the weigh-ins for their Contender Series bout.

Kahlon and Basharat were originally scheduled to have a fight in the bantamweight division at Dana White‘s Contender Series 45 on Tuesday. However, Kahlon came in at 139-pounds Monday afternoon, missing the divisional limit by 3 pounds.

When the two were paired up for the ceremonial face-off, Basharat refused to shake Kahlon’s hand, seemingly annoyed at the weight miss. This led to some verbal sparring between the two, and Kahlon could be heard calling Basharat a ‘terrorist’ as they turned away from each other.

“This pussy wanted a way out of by missing weight by 3 pounds,” Basharat wrote in the caption of the video. “I told him I was still going to whoop his arse, he then called me a terrorist. Wanted a reaction again wanted a way out. Unlucky for him I ain’t going nowhere! I’m waiting to see him tomorrow.”

To say political tensions between Israel and Afghanistan are high is putting it mildly. Since Afghanistan was taken over by the Taliban in August, they have cut off all ties with Israel. The last member of Afghanistan’s Jewish community left the country earlier this month.

Kahlon and Basharat will will now meet at a catchweight, with Basharat receiving 20% of the Israeli fighter’s purse. Hopefully, the two men will be able to keep things much more civil when they meet in the cage on Tuesday.

Do you think Oron Kahlon went too far? Let us know!