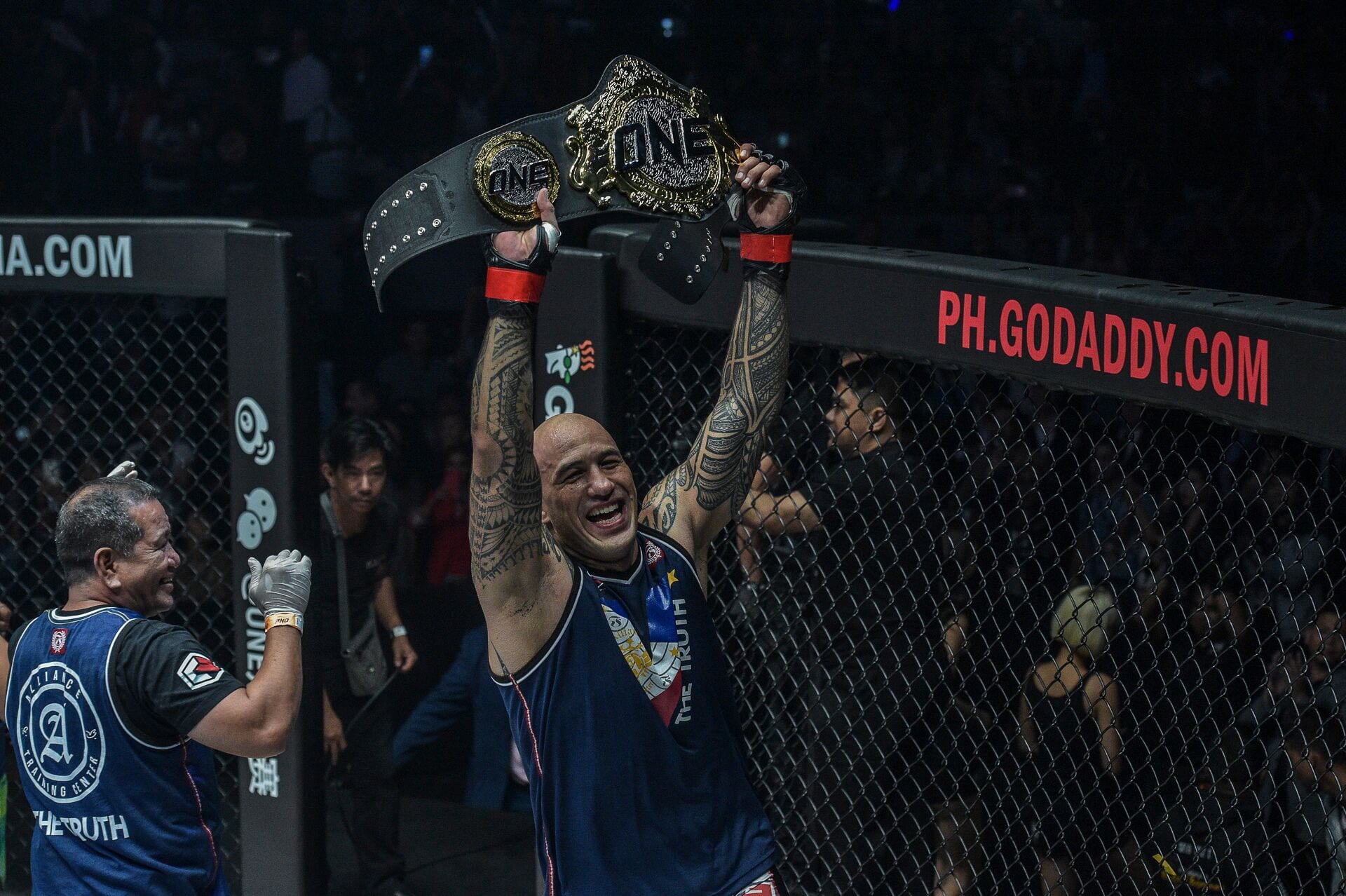 Brandon Vera’s return to the cage was a brief but triumphant affair with the 41-year old stopping Italy’s Mauro Cerilli just after the one minute mark in the first round. The heavyweight title bout was the main event of ONE: Conquest of Champions held inside the Mall of Asia Arena in Manila, Philipines.

There were questions asked about Vera in the lead-up to this bout. The defending champion was coming off a two-year break from competition and in Cerilli was facing a younger, more active fighter.

However, within moments of the contest beginning, it was apparent that Vera and Cerilli were operating at different levels.

The Italian never looked comfortable sharing the cage with Vera and seemed intent on landing a knock out blow as soon as possible. In his haste, he ran head first into a beautifully timed left hook from Vera which dropped the challenger, ending the match instantly.

It was the fourth bout in Vera’s ONE Championship career, as well as his fourth first-round stoppage and his second- title defense. Vera’s win has paved the way for the ONE super-bout between him and Myanmar’s Aung La N Sang for the Light-heavyweight championship. The bout has been hinted at by both the athletes as well as ONE CEO and founder Chatri Sityodtong. The idea has been floated that the two will meet in 2019 on one of the Japanese cards.

The night’s co-main event was a title clash between the Philipines Eduard Folayang and Singapore’s Amir Khan for the vacant ONE lightweight title.

Folayang was looking for redemption, in front of his home crowd, after losing the strap last November to Martin Nguyen. Kahn’s record of having the most finishes and the most knockouts in ONE Championship created an extra layer of hype around a contest that was already highly anticipated.

The first round began with both men testing each other’s defenses with probing leg kicks. Khan, in particular, looking relaxed and fluid had some success hitting Folayang on the counter. 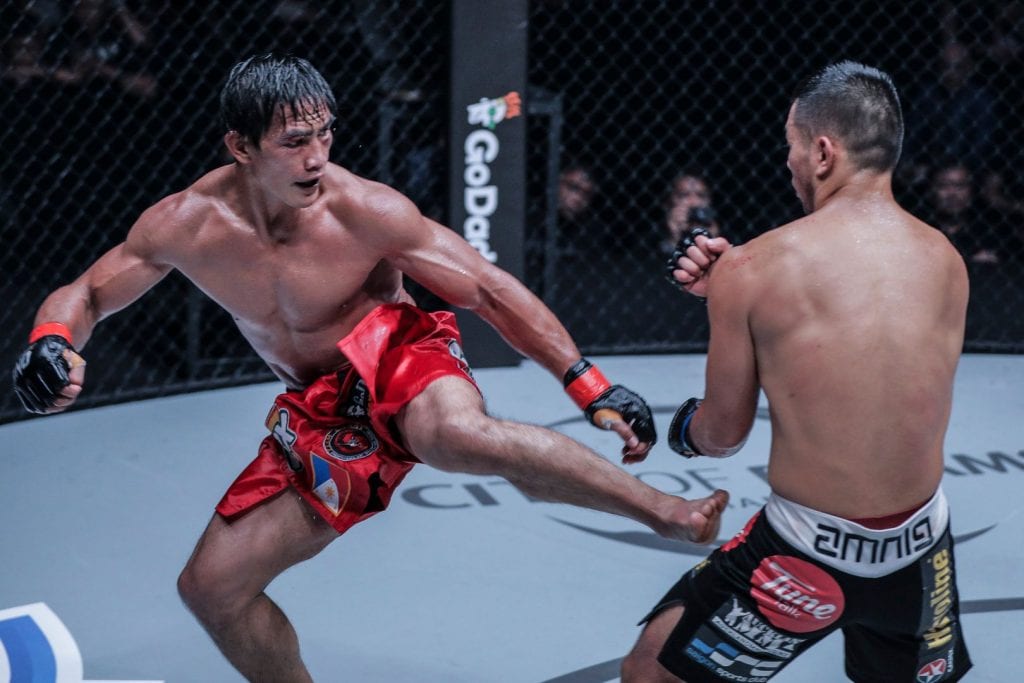 The first round came to a close with Khan having the better of the exchanges but with neither man in the ascendancy.

It would be interesting to know what was said to Folayang during the break between rounds because whatever it was, it did the trick. Folayang dominated the second round from the outset continually pushing forward and unleashing a barrage of impressive and fan friendly offensive maneuvers.

The Filipino roared on by the highly partisan local crowd delivered multiple spinning back elbows and fists while he had Khan trapped against the cage.

Three-quarters of the way through the round, Khan, hoping to stem the tide launched himself at Folayang with a flying knee, only to end up being caught and dumped on his back. 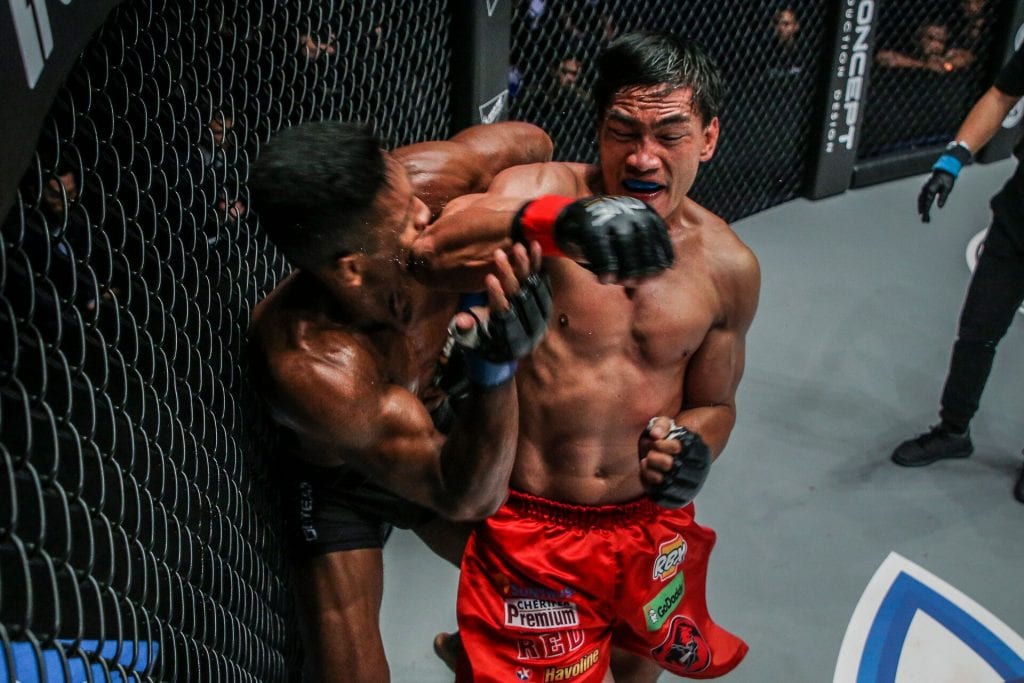 The 24-year-old managed to return to his feet, without taking too much damage but was rewarded with another spinning elbow for his troubles. As the round ended a shell-shocked Khan made his way back to his corner. To his credit, Khan was able to regroup in the third but after the punishment he suffered in the second, never looked like posing a threat to Folayang.

The 34-year-old continued hitting Khan throughout the remaining rounds with a succession of spinning back fists and heavy elbows.

As the fifth drew to a close, the crowd sensing Folayang’s impending victory ratcheted up the volume. The hometown hero then put a stamp on his dominance with a pair of punishing sidekicks as well as flying kick to Khan’s midriff for good measure. There was little suspense, but plenty of excitement as the judge’s scorecards were read out. Folayang emerging the winner with a well-deserved unanimous decision victory.

Folayang’s win now means that Team Lakay hold four of the eight available men’s titles. It is a staggering achievement for the Baguio City crew.

The arrival of Eddie Alvarez and Demetrious “Mighty Mouse” Johnson will surely test their dominance in the lightweight and flyweight divisions, but those are challenges for another day.

James Nakashima kept his undefeated record alive taking it to 10-0 after claiming a unanimous decision victory over the previously unbeaten Russian Raimond Magomedaliev.

The former LFA welterweight champion showed no signs of nerves in his ONE debut, looking calm and composed throughout the course of the bout.

Magomedaliev started quickly but despite opening up a cut on Nakashima’s head in the first-round never looked to have the Amercian in any real danger. 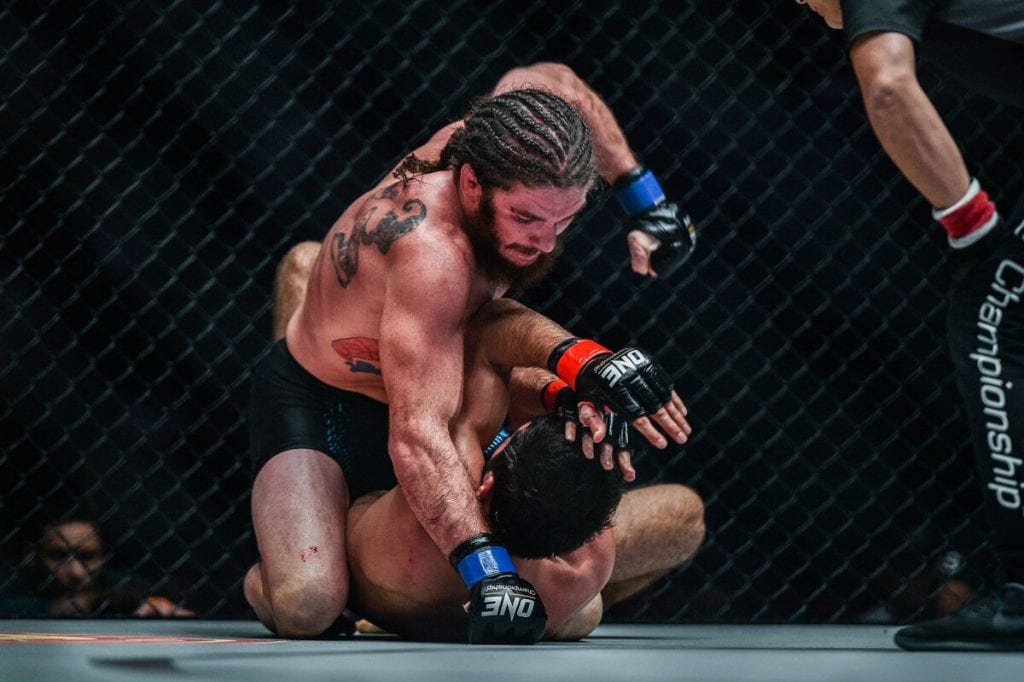 Nakashima’s wrestling game began in impose itself in the second round, and by the third, he was entirely in control. The 30-year-old’s ground and pound slowly wearing down Magomedaliev in the second half of the contest.

It may yet be too early for talk of a shot at the title, but one or two more performances like this and Nakashima will be knocking at the door of whomever holds the belt.

ONE: CONQUEST OF CHAMPIONS Full Results 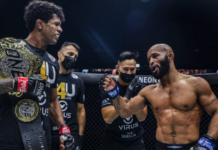