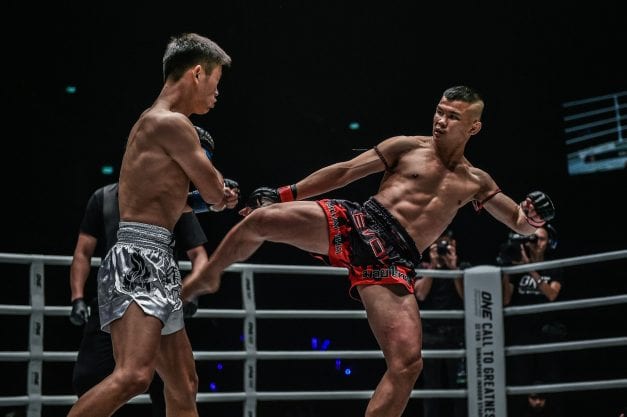 Thailand’s Nong-O Gaiyanghadao added another world title to his already impressive resume today at ONE: Clash Of Legends in Bangkok, Thailand.

The Thai claimed the inaugural ONE Bantamweight Muay Thai World Title after defeating China’s Han Zi Hao via unanimous decision. The five-round affair was an exciting back-and-forth contest, but apart from a brief moment in the second frame, Nong-O never looked in any real danger.

The 33-year-old started slowly, but soon warmed to the task, and with thirty seconds left in the first dropped Han with an elbow. The knockdown appeared to energize the Chinese fighter, who forced the action in the second. Han worked to utilize his speed, throwing punches in fast, efficient combinations. The 23-year-old found some success when shooting straight down the middle. A sharp elbow from Han staggered Nong-O, who almost hit the floor.

Despite Nong-O’s hand touching the ground, it was not a ruled a knockdown, though if it had, it would not have changed the outcome of the contest.

After the second round, regular order resumed with Nong-O taking control. Han continued looking for openings but the Thai’s slick defense meant it was an almost impossible task to land a clean shot.

The race to be the next in line for a shot at the bantamweight crown heated up tonight, with four of the division’s top fighters engaging in a pair of back-to-back contests.

First up, Abelardo threw his name into title contention with a win over the formerly undefeated Takenaka. Demonstrating it’s not how you start a fight but how you end, Abelardo achieved a last-minute victory after delivering a series of punishing elbows to the face of Takenaka.

Up until it was stopped, the Japanese fighter had controlled the bout with his superior wrestling. Abelardo had no answer to Takenaka’s takedown attempts and despite not suffering any severe damage looked set to be handed a unanimous decision loss.

Then at the start of the third, a brace of elbows from Abelardo rocked Takenaka. The 29-year-old recovered and forced the takedown but Abelardo delivered further elbows from the ground. The strikes opened a nasty cut on the face of Takenaka, forcing a doctor’s stoppage with just over two minutes left in the fight.

One man whose stock has risen dramatically is Japan’s Kamikubo. The third-degree judo black belt sapped the life out of Kim on his way to earning a unanimous decision victory. Kim had no answer for Kamikubo’s relentless ground game.

Kamikubo’s constant knees and headshots wore down the South Korean, who looked exhausted by the conclusion of the contest. He may not be the flashiest fighter in the division, but there will not be many bantamweights lining up for the opportunity to face Kamikubo.

After tonight’s showing a title shot or title eliminator seems the natural next step for the Japanese fighter.

Earlier in the night, Jihin Radzuan suffered the first loss of her professional career losing via split decision to Team Lakay’s Gina Iniong.

The 20-year-old Malaysian was outstruck and out grappled for the bulk of the three-round atomweight clash. Right from the outset, Iniong, a six-time Philippine wushu national champion began peppering Radzuan with hard rights to the head.

Realizing she was outgunned on her feet, Radzuan went looking for the takedown, initing the first clinch of the night. However, Iniong provided yet another example of how the Team Lakay stable have improved in the grappling department.

The Filipina was relaxed and kept her composure when the fight first went to the ground, working her way to top control. Radzuan’s constant scrambling never allowed Iniong to fire off any serious shots but nor was she able to cause any damage or attempt any submissions herself. The opening round created the template the rest of the fight would follow. Iniong continued to dominate the bout, with Radzuan getting in pockets of resistance at certain points.

It was only in the last ninety seconds of the fight that Radzuan had any real success. Gaining full mount, she unleashed a barrage of strikes to Iniong’s head, before taking Iniong’s back. An attempted rear-naked-choke fell short due to the final horn sounding.

ONE: Clash Of Legends Full Results