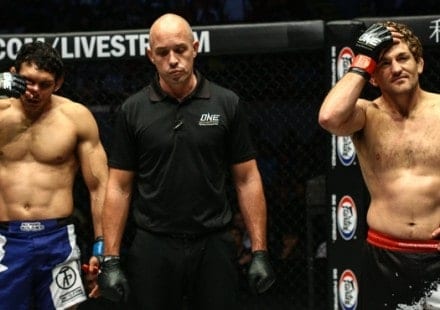 Ben Askren’s latest welterweight title defense ended in unfortunate fashion from tonight’s (April 24, 2015) ONE Championship 26 in Manila, Philippines after his bout with Luis “Sapo” Santos was ruled a no contest due to a gruesome first round eye poke from “Funky.”

It’s a shame, too, as Santos was giving the dominant Askren a run for his money in the bout’s early going. Fans in attendance were shocked to see “Sapo” defend the first five of Askren’s nonstop takedown attempts, even going as far as to turn the tables on two more.

Santos used soccer kicks and knees to damage “Funky” after his failed takedown attempts, and even landed a brutal leg kick that appeared to wobble Askren. However, the former University of Missouri standout finally secured his first takedown with a grinding attempt to control Santos on the mat. In doing so, he accidently bludgeoned Santos with a vicious thumb to the eye, causing a halt in the action.

Santos used the full five-minute recovery period and even a few more minutes while the promotion struggled to communicate with Santos and did everything they could to keep the championship bout going, but in the end, “Sapo” was unable to continue and the bout was rendered a no contest.

Askren was visibly angry at the scene, calling it “embarrassing” and voicing his desire to fight Santos again very soon:

“This is embarrassing. I knew that the strategy and what I heard from people was he comes out strong early then he’s going to look for a way out. And it’s unfortunate that his way out came this way. He’s lived in America for five years. I know he understands ‘get up,’ I know he understands ‘yes’ or ‘no.’ I don’t even know what to say. Let’s fight again as soon as possible, maybe next week, maybe two weeks. You looked for a way out. I’m going to give you a better way out next time.”

It was an rather anticlimactic ending for Askren, who many feel is far and away the best welterweight not competing in the UFC. On the other hand, it’s tough to blame Santos for not wanting to continue fighting one of the best pure wrestlers in mixed martial arts (MMA) history with only one eye.

The rest of the ONE Championship 26 card featured a ton of action, with four knockout finishes, two submissions, and only one decision. Here are the main card’s full results:

Ben Askren vs. Luis Santos ruled a no contest (accidental eyepoke at 2:19 of R1)