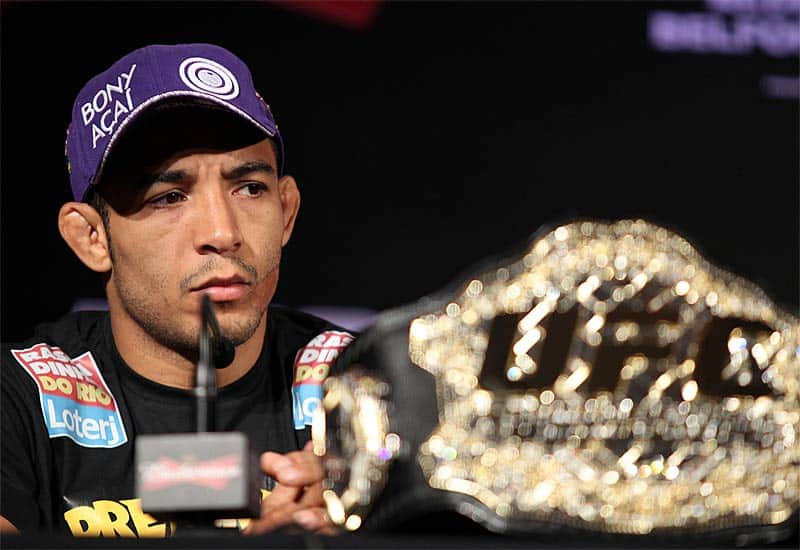 Following the clean sheet for all of UFC 189’s drug tests, including featherweight champion Jose Aldo, more details have emerged of the somewhat controversial (at least at first) run in between ‘Scarface’ and DFS (Drug Free Sport). The third party testing agency was approached by the NSAC (Nevada State Athletic Commission) to provide a random dope test for Aldo on June 10th. After being unable to contact the champion until the 11th, experienced testing agent Ben Mosier was able to catch up with the Brazilian boss on the 11th, and that’s where the media storm started.

A statement released on the DFS website gave further insight in to what happened that day, suggesting that a dropped urine sample and some confusion about Mosier’s work visa had led to the bungle that had Conor McGregor and many others making all kinds of accusations. MMAJunkie’s Steven Marrocco published more details by way of DFS COO Chris Guinty, who says that an off duty federal agent training at Aldo and coach Andre Pederneiras‘ gym Nova Uniao at the tie of Mosier’s arrival was the one that detained the tester, claiming he didn’t have a valid work permit:

Mosier set up the test for June 11 after he initially was unable to reach Aldo on June 10. According to the statement, Aldo was “very cooperative” during the test. But then an unidentified coach halted the collection until Aldo’s head coach, Andre Pederneiras, arrived at the gym. Pederneiras then contacted the Brazilian Athletic Commission.

From there, the process quickly unraveled. Guinty wrote that an unnamed federal police officer training at the gym confiscated Mosier’s passport, claiming he had an incorrect visa, and “detained” the collector at the gym.

“While detaining Mosier, the federal police officer relayed a story of being detained in the United States when returning to Brazil following a previous fight,” Guinty’s statement read. “The officer claimed to Mosier that he was detained by law enforcement officials for 24 hours and was treated poorly, noting that he was treating Ben Mosier in a more pleasant manner.

According to the statement, the local doping control officer enlisted by DFS showed up on scene and clashed with Brazilian commission rep Cristiano Sampaio.

“The local Brazilian DCO (doping control officer) … indicated to Ben Mosier that he had done nothing wrong and was authorized to conduct the test. Sampaio refused to let the local DCO (or Mosier) proceed with any testing despite their employment as a local doping control officer. It was reported only a Brazilian MMA Athletic Commission DCO would be allowed to collect the sample.”

The whole scenario seems to have been aggravated by the presence of this off duty federal officer, and also a breakdown in communications between the Brazilian commission rep and DFS. It was always going to provide a basis for criticism as far as Aldo’s rep goes, as it would with anyone else who was caught up in such a snafu. The report goes on:

After more threats from the federal officer, immigration officials showed up and ruled Mosier was permitted to participate in a rescheduled test on June 12.

According to Mosier, Aldo took the test, but not without complications. He arrived at the gym late, reportedly because he was at the U.S. embassy to obtain a visa for UFC 189, and dropped the first sample before giving a second one. Sampaio, who was there to oversee the test, reportedly changed the cutoff for shipping the sample without explanation.

Mosier was later revealed to have had a valid work permit, making this mess all the more confusing. As it stands, Aldo peed clean, but not before two days of error-filled, perhaps co-incidental, pee test bungling.

Coach Andre Pederneiras is willing to pay for 36 dope tests in the lead up to Aldo vs. McGregor, showing how confident he is in Aldo’s purity. What about you?