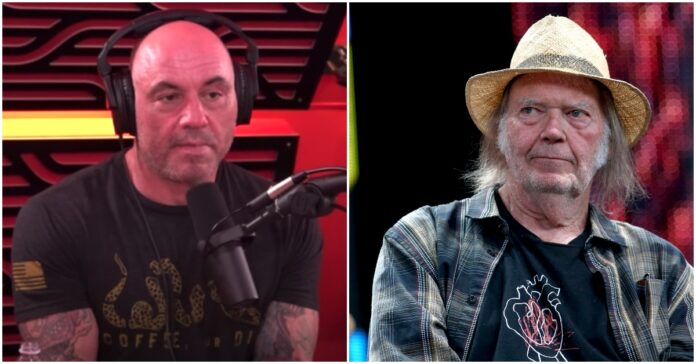 Neil Young appears to have redirected his anger after previously going after Joe Rogan for spreading what he believes to be COVID-19 misinformation.

The rocker posted an open letter, which has since been deleted, to his management and record label that demanded his music be taken off of Spotify – this was in protest to The Joe Rogan Experience appearing on the platform.

Since then, Rogan has been hit with a fresh controversy after a compilation of the UFC commentator using the N-word went viral.

Rogan has since apologized for using the racial slur and the Spotify CEO seems to be happy with that. Daniel Ek recently told his employees that despite being appalled by Rogan’s choice of language he would remain on the platform as “silencing” the popular podcaster is not the answer.

“While I strongly condemn what Joe has said and I agree with his decision to remove past episodes from our platform, I realize some will want more,” Ek said. “And I want to make one point very clear – I do not believe that silencing Joe is the answer.”

A day later, Young has reacted to the above by taking aim at Ek and calling for Spotify employees to leave the company as soon as possible.

“To the workers at SPOTIFY, I say Daniel Ek is your big problem—not Joe Rogan,” Young’s message read via FOX Business. “Ek pulls the strings. Get out of that place before it eats up your soul. The only goals stated by EK are about numbers—not art, not creativity.”

Do you think Neil Young has a point?