LowKickMMA.com
Home UFC News BKFC President David Feldman: “100 Percent We Would Be In The Nate... 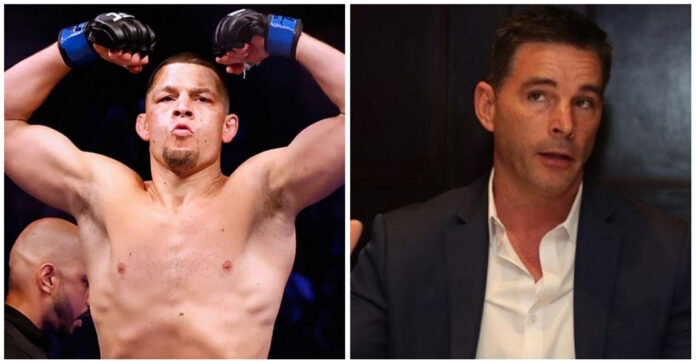 Nate Diaz would make a fit great in the Bare Knuckle FC as per the president David Feldman.

Fan favorite Diaz was put on ice by the promotion for over a year after his last outing against Leon Edwards in June 2021. He had been asking for his release from the UFC but found it frustrating to complete the final fight on his current deal. That is until he got matched up with welterweight contender Khamzat Chimaev for his next fight at UFC 279.

Nate Diaz would be a great fit, says David Feldman

In an interview with MMA Junkie Radio, BKFC president David Feldman talked about the possibility of Nate Diaz fighting in his promotion after completing his contract with the UFC.

“I think it would be a great fit for our organization,” Feldman said. “Let’s see what happens with this fight that they just announced in the UFC with him.”

Diaz will first need to compete against the rising “Borz” who goes undefeated in 11 bouts as a pro. They’ll clash at UFC 279 on Sept. 10 at T-Mobile Arena in Las Vegas, Nevada. The fight was booked after a nearly year-long dispute between the UFC and Diaz, who had previously been linked to numerous opponents including Dustin Poirier.

The 37-year-old Stockton native has talked about his plans to pursue other opportunities, such as boxing Jake Paul for a big payday match, and even discussed competing in other sports such as Brazilian jiu-jitsu, in which he’s a 3rd-degree black belt under Cesar Gracie.

While that may be a positive sign when it comes to Diaz’s openness to other ventures, Feldman will wait to see how the match plays out before making any final decisions.

“The one thing I always want to worry about is that these fighters should still be fighting and not saying he definitely should be fighting,” Feldman said. “But after a tough fight like that, does he want to continue fighting? Is his heart in it? Is his body still in it, and is he ready to do it?

“If those answers are yes, 100 percent we would be in the Nate Diaz business – a hundred percent.” (ht Simon Samano/MMA Junkie)