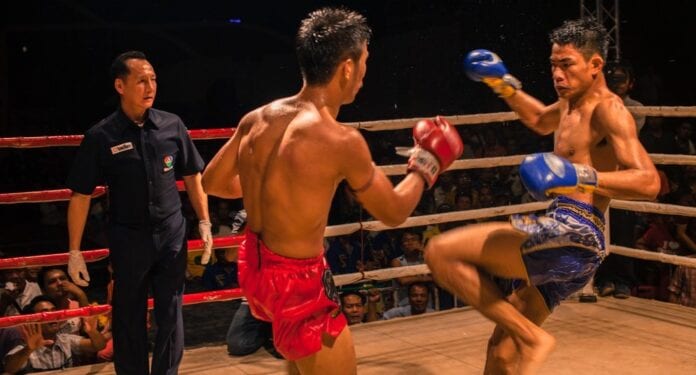 There is no doubt that Muay Thai is the most effective of the world’s striking arts. The “Art of the Eight Limbs” is a full-body fighting system that is simply too comprehensive to be matched by any other martial art that focuses on strikes. While there are certainly some very flashy and eye-catching techniques to be found in the sport, this is not the reason why Muay Thai stands out.

On the contrary, it is the focus on mastering the basics which makes fighters in the sport so well-drilled. Perfecting the fundamentals from a young age leads to the level of discipline and high-level skillsets so many of the elite fighters of Thailand’s national sport possess. While it can be tempting to practice new techniques or become as flashy as possible, it is a far better idea to refine your roundhouse or low kick.

When it comes to the latter, there are fewer strikes more important. The low kick is an essential tool for any Nak Muay to possess. It is simply crucial for any Muay Thai competitor to have a strong low kick. Allow us to explain why this is, below.

The Importance of Low Kicks

Imagine walking into a forest and being tasked with chopping down a large tree. You know that targeting the base of the tree will be the best way to approach the job, as the entire tree will fall as a result. The same principle applies to your opponent: target their base and eventually the rest of the body will follow.

An abundance of low kicks is incredibly difficult to recover from. If thrown correctly, they can completely destroy an opponent’s ability to move around the ring. They can slow them down to the point where they become a sitting duck, hobbling around due to the damage you have inflicted on them. Their ability to kick is completely removed, and their mental strength will naturally take a massive hit.

For fighters who have a style based on speed and movement, low kicks are an excellent way to bring things back into your favor. Especially if you are not as much of a mover and prefer a slower pace to a fight. In Muay Thai, the smartest fighter typically wins the bout. There is nothing smarter than slowing your opponent’s engine down and keeping them where you want them.

The Various Types of Low Kicks

When it comes to throwing low kicks, you will have a number of options at your disposal. In general terms, you have kicks which can be thrown from the rear and lead legs and targeted on the inside or outside of an opponent’s leg. More than this, you can mix up the type of low kicks in order to set up additional strikes, engage in the clinch, or simply try to stop your opponent.

The first type of low kick we will study is the lead leg low kick.

The lead leg low kick is always going to be the easiest to land, given that is closer to the opponent and does not require loading up to throw it. As such, it is the least powerful leg kick you can land. It is, however, the fastest, giving a fighter a weapon which can be used to score points and set up other strikes. In contrast to the rear leg low kick – which is a lot more powerful – the rear leg low kick is more of a point scorer.

It can also precede a heavy punch or be used to confuse an opponent into dropping their guards. In Muay Thai, a fighter needs to be aware when it comes to defending their bodies, as there are a number of strikes which can be thrown at various points in the body. This is where the lead leg low kick can come in very nicely. It can be used to unsettle the opponent or set up other kicks and punches in a quick manner.

On the other hand, the rear leg low kick can be a devastating shot capable of finishing a fight. Most fighters will tend to only use their rear leg when it comes to low kicks, especially those who rely on this strike as part of their overall game plan. The rear leg low kick can be devastating to an opponent, completely butchering their lead leg and shutting down their mobility.

It is not just raw brutality which makes this strike important. It can also be used to target an opponent’s balance when they are setting up – or resetting from – a strike aimed at you. It can sweep their pivoting foot from under them, or simply add the final blow to drop them to the canvas and have them counted out. The rear leg low kick comes with a lot more variety than many think.

There are a number of fighters who have become so adept at targeting the inside area of their opponents’ legs that this kick becomes a trademark. The reason why the inside low kick can be so appealing to any fighter is that it is the softest area a fighter can target. In Muay Thai, soft means vulnerability. Any area of vulnerability should be exploited, as you can be certain this works the other way around, too.

The inner thigh and calf are excellent targets for peppering your opponent’s legs with low kicks. The muscle areas are so integral to mobility that it is absolutely feasible a fight can be ended with sufficient attention paid to these areas. Don’t forget to target the inner knee area, too.

If the inside leg is favored by some, there are many other fighters who prefer to go inflict as much damage as possible on the outer leg. Given the presence of a particular grouping of muscles – and the largest muscle in the thigh – frequent low kicks can have a pretty bad effect on an opponent. Anything that is bad for your opponent will be good for you, when it comes to winning a fight, that is.

There are a number of areas located on the outer leg where Nak Muays will target in order to slow down their opponent. When it comes to attacking, a fighter needs the flexibility and ability to emphasize weight on their leg, so battering these muscles with frequent low kicks can be disastrous for them throughout the course of a fight. Areas such as the ankle bone are also great targets.

Low kicks are an integral part of Muay Thai. As such, fighters should always be encouraged to drill them into their fighting style. Regardless of whether you are a Muay Mat or Muay Femur, the ability to break down an opponent and take their legs away from them is one which will undoubtedly help you as you progress as a fighter. For all the beauty of Muay Thai, there will be that undercurrent of brutality.

Inside the ropes, it is warfare. You must use absolutely every single potential advantage you can get your hands on. If you notice that a fighter cannot defend themselves against low kicks, you may find that you can create an environment in a fight where everything goes your way.