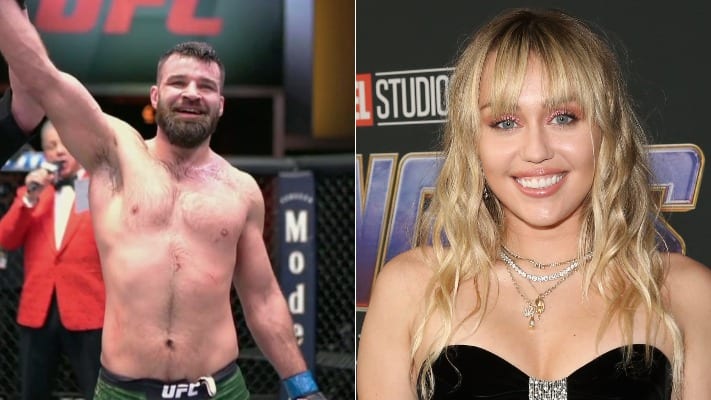 UFC Middleweight contender Julian Marquez took to the mic, after his submission win over Maki Pitolo at UFC 258, to ask superstar singer and actor Miley Cyrus to be his valentine’s.

During his epic post-fight interview, Marquez shouted “Miley Cyrus, will you be my Valentine?” Marquez made the best use of his platform to make the MMA fans around the world know who he wants his Valentine’s date to be. You can watch the video of Marquez asking Miley Cyrus out below.

“I’ve been waiting 31 months to get on this damn mic and call these people out right now,” Marquez said. This is my time to shine. So, Miley Cyrus! Will you be my valentine?”

Surprisingly, the famous popstar took to twitter to respond to Marquez’s valentines callout. Cyrus tweeted, “Shave an MC into your chest hair and I am YOURS. Happy VDay and Congrats my love!”

It seems like “The Cuban Missile Crisis” did enough to capture the pop stars attention.

Overall, it was a day to remember for Marquez, earning a performance of the night bonus then getting noticed by Cyrus.

Did you expect Miley Cyrus to respond to Julian Marquez’s valentines call out?