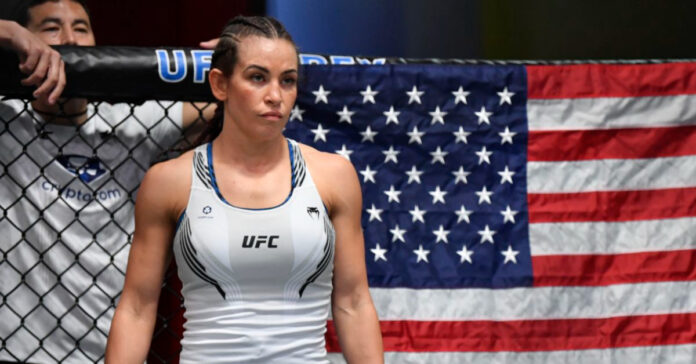 Former UFC champion, Miesha Tate made an unsuccessful debut in the flyweight division when she took on the tough former title challenger, ‘Lucky’ Lauren Murphy.

Murphy would take it to Tate, battering and opening up a cut on ‘Cupcake’, winning the striking battle, while Tate struggled to find consistent success. Tate did seem to be the better grappler, having some success in those realms, but struggled to keep Murphy engaged close up.

The fight would go the full 15 minutes and all three judges would award the fight to Murphy who now finds herself a step closer to a second title with a win over a former champion and notable name.

Following the loss, Tate would take to her Instagram to release a statement, seemingly in good spirits while crediting Murphy on her performance.

“Some women pay a lot of money for lips like these!” Tate began. “All I had to do was get in a little fist fight! Tonight wasn’t my night, congratulations to Lauren Murphy, and we continue to learn the lessons of life.”

“I had the most UH-mazing dinner at my favorite restaurant @cheeseboatbk and met Mama Cheeseboat herself. I’m still blessed beyond measure win lose or draw! Thank you to all those who continue to love and support me regardless, you know who you are,”

What’s Next For Miesha Tate?

Tate now finds herself on a two-fight skid, with her last win coming in the first fight of her return to competition in July of last year.

Tate is still a big name and there is no shame in losing the No.3 ranked fighter in the world. She also proved that she has the ability to successfully cut weight to 125lbs and although she has been unsuccessful in her last two walks to the octagon, she still has options at both flyweight and bantamweight if she chooses to continue her bid to become champion once again.

What should Miesha Tate do next?