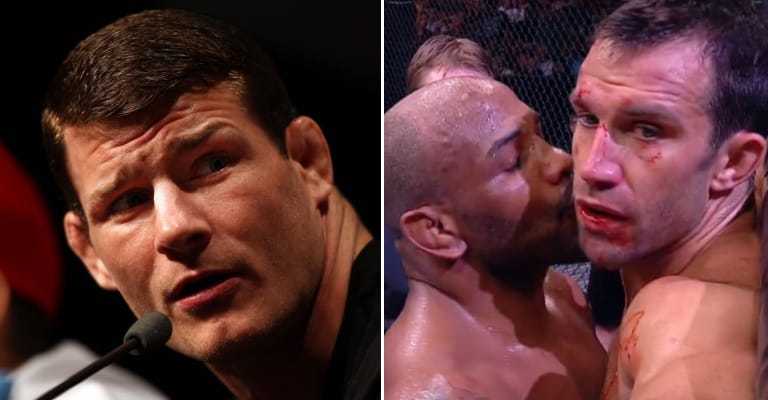 Michael Bisping thinks Yoel Romero took it a little too far after knocking out Luke Rockhold in the main event of last weekend’s UFC 221 from Australia.

Following a close, carefully-fought bout from both in the opening two rounds, “The Soldier of God” exploded in the third round with a devastating left to Rockhold’s temple and a follow-up uppercut that instantly flipped the former champ’s lights off.

Adding insult to injury in the eyes of some, Romero then professed his love for Rockhold and literally kissed him while he still clearly dazed. One fighter wasn’t a fan of the post-fight scene, as Michael Bisping, who, ironically enough, brutally knocked out Rockhold to win the belt back at UFC 199 in 2016, recently criticized what Romero did on his Believe You Me podcast (via MMA Mania):

“I don’t take pleasure from seeing somebody knocked out like that, I really don’t,” Bisping said on his latest Believe You Me podcast. “He got knocked out and he just looked so devastated, absolutely crushed. Then to make matters worse, Romero — the guy that just knocked him out — gets in his face, pins him up against the fence, has his arms over his shoulders like that so Rockhold literally can’t go anywhere and he’s professing his undying love for him, ‘I love you Luke, I love you.’

“There’s nothing wrong with kissing a man on the cheek,” he said. “But I just think after you’ve knocked them out cold, after you’ve taken away their dreams of being world champion, after you’ve literally inflicted a lot of violence, the marks are visible, there’s blood on his face, he’s maybe lost some brain cells and he doesn’t know what the f**k is going on — pinning the guy up against the Octagon and trying to make out with him is a little bit much.”

Despite his differences with both Rockhold and Romero, “The Count” thinks the Australian commission presiding over UFC 221 should have been more present to prevent the scene from happening, because some serious ramifications could have resulted:

”I’ve got to say, in that circumstance, and I’m not trying to knock any of the officials, but really happy Valentines Day, it’s really quite the couple they make there, I’ve got to say, they shouldn’t allow that to happen in future because you got to remember, think about it. I know when I’ve been knocked out you haven’t got a clue what’s going on. You haven’t got a jar of f**king clues where your head is at and you have to piece it back together.

”And then all of a sudden you have the guy who has just knocked you out with his arms around you, up against the Octagon sexually assaulting you, #MeToo. There’s nothing to stop Rockhold elbowing him in the face, punching him, because he might still feel the fight is going on. Who knows? I just don’t think they should allow, certainly not Romero, I mean come on, it was a little bit much.”