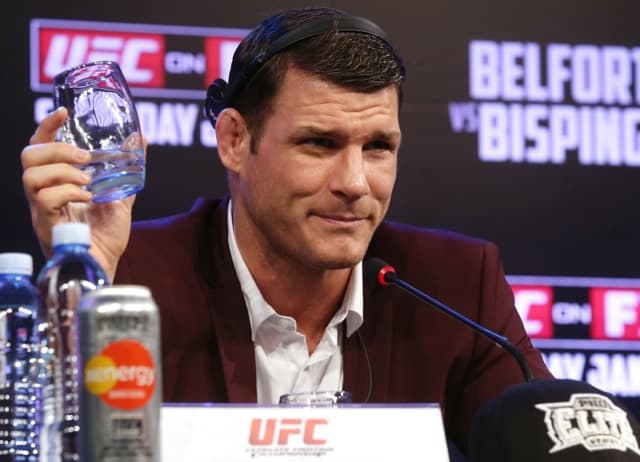 Michael “The Count” Bisping is one of the most polarizing figures in the UFC. Known for his brash English trash talk and well-rounded style, Bisping is now a UFC vetran of 21 fights. He has been with the company for quite some time now and has become a fan favorite.

When Bisping fights, people love to watch. They love the trash talk and animosity that usually comes before one of his fights and they love to tune in on fight night and see what “The Count” has to offer. Due to these facts, Bisping has become one of the highest paid athletes on the UFC roster. However, that wasn’t always the case.

Bisping recalled some early struggles in his career during an interview with Fightography:

“When I came off ‘The Ultimate Fighter,’ I had to get a visa, so there was around six months until I fought again. I hadn’t fought for a year, so even then, money was so tight. It really was. Things were getting quite desperate, to be honest. But, you know, I’m thinking, ‘I’m fighting in the UFC now. I’ll have a fight soon.’”

“The Count” burst onto the UFC scene when he defeated Josh Haynes in June of 2006 to become The Ultimate Fighter (TUF) 3 winner. Despite winning a UFC contract, Bisping admits that he was sleeping in his car and borrowing money from his parents to fill his car with gas. He also claims he made zero dollars in his professional debut. Times were tough for the Brit, and he would not compete again until December of that year.

Facing six months between fights and lengthy lay off prior to his TUF finale victory, Bisping was on the verge of not being able to celebrate Christmas with his family due to financial issues. However, a call from UFC president Dana White changed everything:

“I remember one day Dana called me up, and I picked up the phone: ‘Hey Dana, how are you doing? Obviously back then, and even still a little now, you’re star-struck. It’s the president of the UFC, and he calls me up and he says, ‘Michael, I know you’re not fighting until December. How are you doing for money?’ And, of course, I’m a man; I have pride. So, you know, I lied. I said, ‘Yeah, yeah. I’m doing OK.”

“It was right before Christmas. I was able to have a good Christmas with my kids, buy some good presents. If it weren’t for that check , I couldn’t have done anything like that.”

Bisping is very straightforward in the interview regarding the financial luxuries he’s received and benefited from over the course of his long career. “The Count” also speaks on how the company has always treated him well:

This story may change some people’s views regarding White and the UFC. The company has received some harsh criticism from former fighters claiming that the company does not treat their fighters well and that fighters are well under-paid. However, this case proves that claim to be false.

Bisping will once again step into the octagon next month in a quite a big fight for the Brit, one that if won may propel him closer than ever to a coveted middleweight title shot he’s never been granted. “The Count” will take on Luke Rockhold in the main event of UFC Fight Night 55 on November 8, 2014 in Australia.