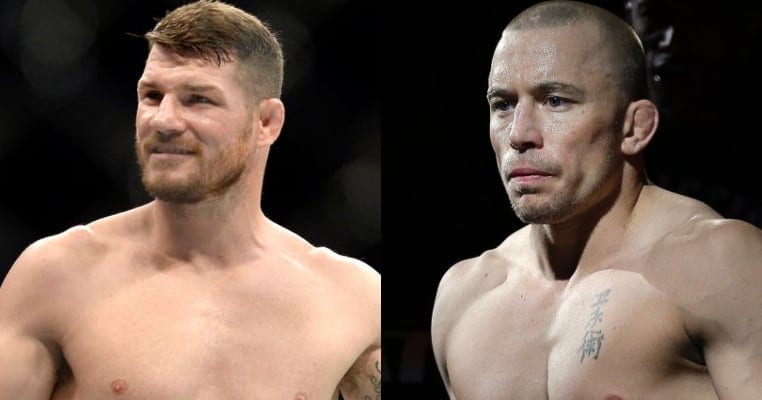 The UFC officially announced a middleweight title bout between champion Michael Bisping and returning former welterweight titleholder Georges St. Pierre earlier this month, but the bout has yet to receive a date and venue.

Bisping has made it clear that he’d like the fight to take place on July 8, 2017 during International Fight Week, but St. Pierre has hinted that he won’t be ready at the time. “The Count”, however, doesn’t seem to be willing to wait for “Rush”, recently saying that he calls the shots:

“So long story short it looks as if GSP is trying to push for a later date (then July 8),” Bisping said on his podcast. “”I have heard rumors of that a while ago from Ariel Helwani. I heard that he wanted like September or October and that is what the UFC told me as well. But I am just throwing it out there right now. If he (GSP) wants to wait until September or October, then he can go find himself another opponent. Because I call the shots. Without sounding like an asshole, it is my belt. I am the champion, and I am not willing to sit around until September or October. This fight was discussed in January. You know a fight camp only takes 8 weeks. Or six weeks. So fighting in September or October is ridiculous. July 8 is the date. I may be a little bit flexible and be willing to go a little past that date if needed. But I want to fight international fight week July 8. So Georges St-Pierre, get it together. Stop doing your f*cking gymnastics. Stop doing your backflips and whatever it is. Let’s do this buddy. Sign the paper work. You want it. You sat there at the press conference. You talked big. So sign the god damn paperwork. It is as simple as that!”

Bisping even went as far to say that he’d fight No. 1 contender Yoel Romero, who was expected to receive the title shot, instead of waiting for St. Pierre, who likely represents a more lucrative opponent:

“If he’s not ready then I guess Yoel Romero gets his title shot! Listen I am not afraid of Yoel Romero. If GSP wants to fight then of course, there is a great storyline there. The fight would do great business. But I am not willing to sit around and he’s not calling the shots. I am the champ.”

“I am not willing to wait a year for Georges St-Pierre to fight me. I might as well do two fights in that one year and still make the same money.”

Do you agree with Bisping’s train of thought here?