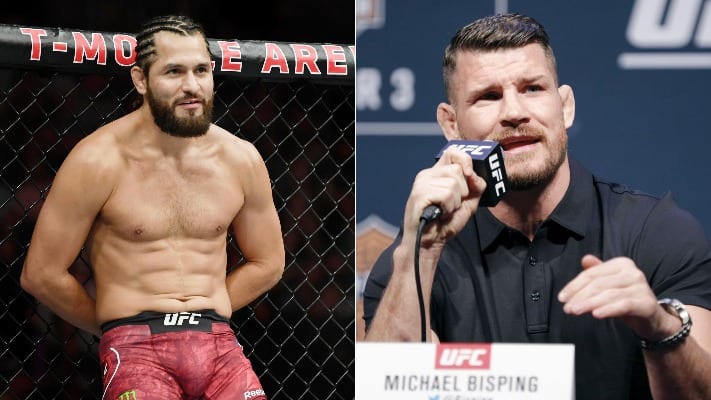 Jorge Masvidal and Michael Bisping have had their fair share of issues with one another in the past. However, it looks like that is now behind the two mixed martial artists.

Masvidal and Bisping got into a verbal confrontation prior to UFC 217 back in 2017. Things got so bad that Masvidal threatened to slap Bisping at UFC London earlier this year. However, Bisping – now retired from fighting and working as an analyst and commentator – was part of the panel that interviewed Masvidal in person after UFC 239.

Bisping stood right next to Masvidal during the interview, which went on without a hitch. Masvidal had just wrapped up pulling off the fastest knockout in UFC history, finishing Ben Askren with a flying knee in five seconds. Speaking on his podcast, “Believe You Me,” Bisping explained why he thinks the beef between himself and Masvidal is squashed (via BJPenn.com):

“He came up to the desk afterwards and Chael said to me, cause you had Jon Anik on the end, Chael in the middle, and me on the other end. And Chael’s like, ‘are you two guys cool?’ I’m like, ‘honestly I don’t think so. I’ve got no issue with him, but you know how he’s like. He’s a hothead for sure.’

Bisping then revealed he and Masvidal actually interacted prior to UFC London earlier this year, where he and Jorge were able to walk past each other without anything getting out of control:

“But listen, Jorge came up and he was cool as f*ck man. And I think he realized, cause when I saw him in London I walked past him. If I wanted to be an asshole there, I could’ve been an asshole.

“But I said, ‘hey what’s up Jorge?’ And he kind of nodded. I think that was, without saying squashing the beef type thing. But he was cool as hell man. He was cool as hell. I said congratulations, I said some kind words because how can you not?”

Do you think the beef between Bisping and Masvidal is finally at an end?