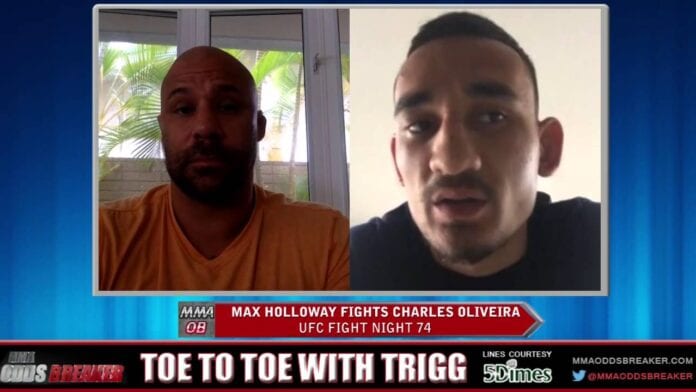 Top five featherweight Max Holloway will return on August 23, 2015 at the SaskTel Centre in Saskatoon, Saskatchewan, Canada, as he headlines UFC Fight Night 74 opposite Charles Oliveira. ‘Blessed’ brings with him a blistering six-fight win streak, culminating in a submission victory over Cub Swanson at UFC on FOX 15. Having finished al but one of his last six opponents, Holloway is being very closely watched in his new and impressive run of form.

There’s still something bothering the Hawaiian striker though, it’s his last loss. He faced the current interim featherweight champ Conor McGregor back in 2013 and lost a very one-sided decision. Talking with MMA Oddsbreaker, ‘Blessed’ reflects on their first fight, and how he thinks a rematch might sell and how his striking game has got better due to a bigger team:

“I guess I’m still developing, we still didn’t really have striking coaches back then. We didn’t have team mates, now we have a great team and striking coaches. I think a lot of my stress is gone now because I have people to help me gameplan.”

“I can’t say he is not the real deal, but I want my rematch. I believe I can beat him, that’s my beliefs, I just can’t wait to rematch him. Everyone was saying I should be happy I went to a decision with him. That’s like being happy to be a loser, I don’t want to do that, I want to be a winner. I think the second fight would be awesome. If the UFC wants to talk numbers, there’s a big hype between Max Holloway vs. Conor McGregor 2, so we can do that.”

With Frankie Edgar still waiting in the wings for his title shot, would it make more sense to book Edgar vs. Holloway (if Max wins) to decide the rightful contender to the championship fight, or does the UFC put ‘Blessed’ in line now that Chad Mendes is somewhat out of the frame? Holloway agrees that the featherweight division is a little messy right now, as he ponders on who he could fight with a win over ‘Do Bronx’ in Canada:

“Conor got a date with Jose (Aldo) now, so I don’t know, maybe Frankie Edgar, Chad Mendes is now coming off a loss, I don’t know where the division is right now. I got Charles (Oliveira) in front of me now and he’s a tough dude”

Max Holloway could lengthen his win streak to seven if he is victorious at UFC Fight Night 74, and he’d halt Oliveira’s four-fight spree in doing so. An impressive finish could really prove as the tipping point in the 23-year old’s UFC title hopes, although a loss at this young age wouldn’t prove crippling.

Who are you picking to win this weekend’s UFC headliner?