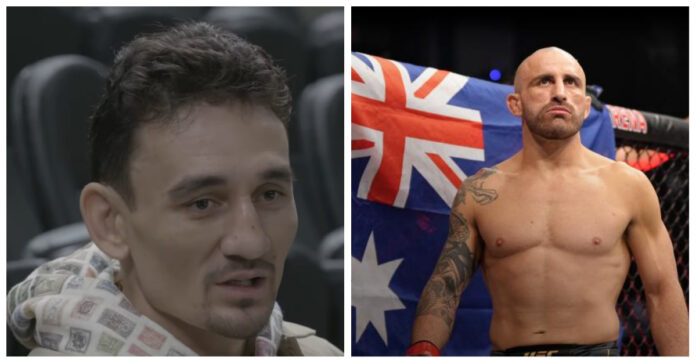 Max Holloway is targeting a finish in his upcoming fight with Alex Volkanovski.

UFC veteran Max Holloway has shared the octagon with the current UFC Featherweight king Alexander Volkanovski on two occasions. The fights garnered major support from the fans. Although ‘Blessed’ was defeated on the judges’ scorecards both times, they were razor-thin contests that could’ve gone either way.

In an interview with Brett Okamoto for ESPN MMA, Max Holloway shared his thoughts on the third fight with ‘The Great’ on July 2 at UFC 276.

Holloway believes he won both fights and highlighted the support he received for the same.

“For sure, yeah, for sure. Both times, even the second time,” he said. “But like a wise man once said, it is what it was. It is what it was man. You get back up on the horse, you keep riding it. We did what we did like how you said, especially the second one, Dana White, half the UFC roster said what they said. They thought I did enough but I wasn’t there to add any more gas to the fire. It happens, let it go, you move on and we’re here now.”

When asked whether it was difficult to let go of having the losses on the record when they could’ve been a win, Holloway said that he does not see the point in getting frustrated over it.

“Not at all, not hard at all. Why cry over spilt milk? Obviously, I don’t know in what world or any world that someone thinks that he did it convincingly because we’re here for a third time. We’re here for a reason and you guys are going to find out that reason come July 2nd.”

He’s willing to be friends with Volkanovski and extended an invitation to a gaming match.

“People are saying I should get him in my lobby of Call of Duty when I play. I play Apex now though. We see what happens, why not? It is what it is.”

Holloway stated that he doesn’t see the fight going past three rounds this time despite going the full distance the previous two.

“I’m taking this fight like this is my first fight and this could be my last fight. We don’t know what happens after this, we don’t know if I ever fight again. You just really don’t know so that’s the way I’m approaching it and fans are going to be in for a treat for this one.”

“I had ten rounds with this guy. We’d be lucky if we get past three in this one. It’s going to be an amazing one.”