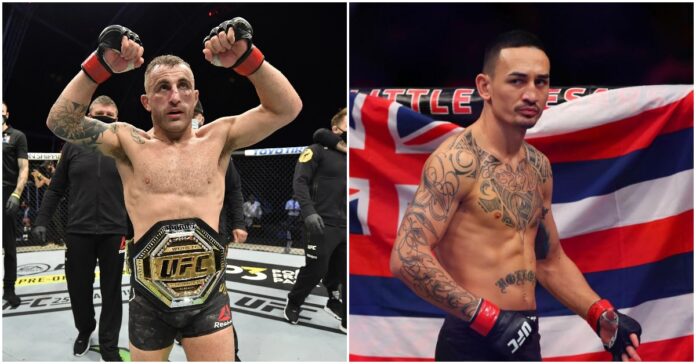 The UFC are reportedly targeting a trilogy fight between Alexander Volkanovski and Max Holloway to take place at some point in the summer, with either July 2 or July 30 being the front runners.

Per Ariel Helwani, the trilogy fight between the consensus two best featherweights is not far away, two years on from their last fight.

In their first meeting in December of 2019, then champion Holloway was scheduled to take on the challenger, Volkanovski who was coming off back-to-back wins over Chad Mendes and Jose Aldo. The underdog, Volkanovski would shock many by defeating Holloway via decision.

It wouldn’t take long for the former divisional ruler in Holloway would get the opportunity to reclaim his title. This time, however, the decision was met with some contention with many vocal fans claiming robbery as Volkanovski won by decision again.

Since that bout, both men have had two fights that have further cemented themselves as the two best in the division; displaying ability just on another level to the rest of the pack.

After the second fight, some saw Volkanovski as an undeserving champion with something to prove. He would produce two sensational back-to-back performances; overcoming adversity to dominate Brain Ortega, and then went on to put a four-round beating on Chan Sung Jung.

Holloway would bounce back after the loss to produce the greatest performance of his career, dominating and landing 445 significant strikes against Calvin Kattar. Then Holloway would take on talented striker, Yair Rodriguez which would ultimately produce an entertaining striking battle. Holloway would just prove to be that little step ahead, earning himself a decision win.

With Volkanovski’s stock improved and Holloway the ever entertaining fan-favorite, the trilogy fight is as big as ever.

Who do you have, Max Holloway or Alexander Volkanovski?