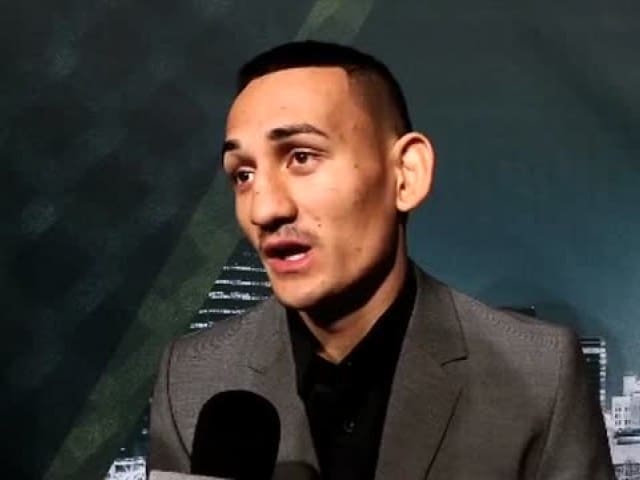 Max Holloway walked away from UFC Fight Night 74 in Saskatoon, Saskatchewon, Canada as a winner, but perhaps not in the decisive fashion in which he’d have liked. Charles Oliveira injured his neck in the first round of their main event featherweight clash, leaving the octagon on a stretcher and wearing a neck brace after his TKO injury loss. For ‘Blessed’, it means his seventh straight win in the UFC featherweight division.

Talking at the post-fight press conference, as transcribed by MMAJunkie.com, Holloway makes it clear he either wants Conor McGregor or Frankie Edgar in a stadium fight:

“UFC works in mysterious ways; I’m sure they’re going to find something for me. Let’s get UFC to Hawaii, and what better fight than Holloway vs. Edgar in a stadium? It would be huge.”

“I’d fight him any day of the week,” Holloway said of McGregor. “Now that I don’t have a fight I can talk how I feel. I’ll fight him any day of the week. UFC could have called me up for the last one (at UFC 189) and I would have taken it. But they didn’t, they chose Chad (Mendes) instead and I’d love to fight him. You want to talk money? Holloway vs. McGregor you got money with the No. 2 of that fight.”

Obviously a rematch with McGregor would be huge, and it could happen regardless of the Irishman’s status after his UFC 189 title unification bout with Jose Aldo. Frankie Edgar is always a viable option for any top flight featherweight, but ‘Blessed’ remained humble, telling MMAFighting.com that he sends his prayers out to his injured opponent ‘Do Bronx’:

“Send your prayers to Charles,” Holloway said afterward. “It’s part of the game. It’s sad to see that happening. This is how we make a living.”

A brutal ending to the fight for Oliveira, but it could mean big things for Holloway. Oddly enough, his loss to Conor McGregor could now become the lynch pin for his title shot in the near future, if ‘The Notorious’ beats ‘Scarface’ that is.

Who do you think Holloway should face next?