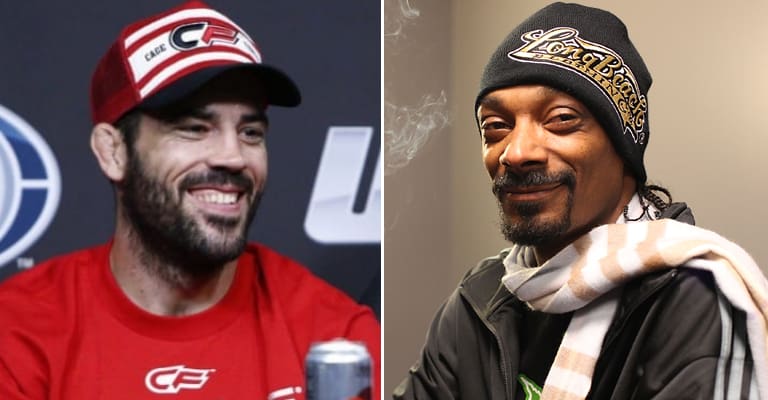 Matt Brown apparently has it out for longtime rapper Snoop Dogg.

A longtime veteran of the UFC’s talented welterweight division, ‘The Immortal’ recently staved off retirement with a beautiful elbow knockout of Diego Sanchez last November. The win snapped a three-fight streak of stoppage losses, and he’s now headed for a match-up with Carlos Condit in what should be a fan-favorite affair.

Recently speaking on The JRE MMA Show with Joe Rogan (via MMA Fighting), ‘The Immortal’ said he’s looking to get his hands on Snoop, a longtime MMA fan and even a commentator on Dana White‘s Tuesday Night Contenders Series, for the trash he talked to UFC superstar Conor McGregor following his TKO defeat to Floyd Mayweather last year:

“Snoop Dogg, that piece of s**t” said Brown. “I’ll call him out. He called out Conor. He called him a b**ch. That’s not cool, man. I don’t care [if he was intoxicated], he put it out in public. He could have apologized, deleted it, whatever. If I go to the UFC PI [UFC Performance Institute], I might just punch him if I see him there. I’m cool with that.”

According to ‘The Immortal,’ McGregor has done a ton for the sport by working incredibly hard, and Snoop has no knowledge of what it takes to fight in MMA:

“I’m just saying, that really offends me. Conor, people all have their opinions about him, I respect the s**t out of that guy. I love what he’s done, I love his schtick. I think he’s a true sportsman. He comes into the limelight for a while and then he goes back, and I think he works his ass off. I really think he does. He wouldn’t be where he’s at if he didn’t, but everyone judges him by what he does out here.

“I would say also that [commentators] have no right to be saying things that they’ve never done. You don’t have to compete, [but if you train] you get such a more in-depth knowledge about what they’re truly going through and what’s happening by just experiencing it a little bit.”

An interesting point of view from one of the UFC’s most gritty competitors. He’s certainly stuck up for the UFC’s golden boy with his shining assessment of ‘The Notorious,’ yet the fact remains the lightweight champion has not defended a single belt in the Octagon and is now aiming for an absolutely farcical rematch with ‘Money’ in the UFC.

So while he may want to punch Snoop Dogg for blasting McGregor and his loss to Mayweather, Brown may have a much longer line of McGregor haters to sock quite soon if his first defense isn’t made apparent.

And it may not be.