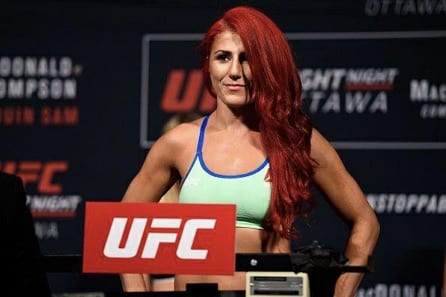 To suggest that the path taken by Randa Markos to the UFC wasn’t the usual journey would be a vast understatement.

Markos was born in Iraq to Chaldean Christian parents. As a child, she learned what it was like to go without, and what true survival felt like. During the Iran-Iraq War, her family was held at gunpoint. They were able to escape, and fled to Canada.

Randa was three at the time when she first set foot in the nation that remains her home.

“My family and I came to this country (from Iraq) with almost nothing and the community helped us,” Markos told Canadian Press. “We struggled a lot to get here.”

Her father, a soldier in the Iraqi army during the war, never fully recovered from the horrors he witnessed first hand.

“He watched a lot of people die in front of him,” Markos explained.

One of four siblings – Markos has a sister and two brothers – she acknowledges the efforts of her mother for providing the strength and determination she found in order to make it in the UFC.

In high school at St. Joseph’s in her adopted hometown of Windsor, Ontario, Markos found her true calling on the wrestling mat. One-on-one competition suited her personality. She liked being out there, knowing that the only person she could rely on was herself.

Markos won a silver medal in the Ontario provincial finals. She was named her school’s female athlete of the year.

When she graduated high school, it was time for Markos to find a new passion.

“I couldn’t continue with my wrestling without leaving Windsor, so I got into jiu-jitsu, which is similar to wrestling, and that gave me a second chance to pursue something and take it all the way,” Markos told the Windsor Star.

She also gave kick boxing a try but after attending an MMA card, Markos instantly knew what her next destiny would be.

She was ready to bet on UFC as the place where she belonged.

“I’ve been in love with it ever since,” Markos said. “It’s been pretty amazing.”

As with most experiences in her life, the journey into the octagon carried many challenges for Markos to overcome, and not just when she was tangling with an opponent inside the cage.

“I’m representing all the Middle Eastern women around the world,” Markos told Canadian Press. “I think there’s a majority of us that had it really tough being a woman, especially me being a woman and being in this sport.

“A lot of people looked down upon me in my culture.”

For her, there was never a doubt in her mind that this was where she should be.

“I just want to show everyone don’t worry about what people say,” Markos said. ”We all have exactly the same opportunities. We just have to put everything aside and just do what we want to do.”

Plenty Of Ups And Downs

Her big break in MMA came in 2014 when Markos earned a spot in The Ultimate Fighter 20 via an open tryout and ended up reaching the semifinals, earning a contract with UFC.

“I don’t think anybody expected anything from me,” Markos said. “They just thought I was a nobody going in there to lose.”

Ever the Canadian, Markos earned the nickname “Quiet Storm” for her combination of politeness outside the octagon and ferociousness when inside it.

Well, unless said Canuck is decking you with a roundhouse kick or making you submit with an arm bar, that is.

“There’s been times where I’m like, ‘Why am I doing this?,” Markos admitted. “Why am I putting all this time in and putting all of my life aside – my husband, my family, my parents – putting everything aside just for this, what I love do to?’

“You’re constantly thinking in your head, ‘Am I doing this for the right reasons? Am I going to get anywhere?’”

Her signature victory was a 2017 split-decision triumph over former UFC world women’s strawweight champion Carla Esparza. Markos has ranked as high as No. 6 in the world.

Her most recent bout was a unanimous decision setback to Amanda Ribas at UFC Fight Night 170 last March in Brazil.

“As a fighter I will never quit,” Markos recently tweeted. “I hope that my corner will speak for me when I’m too proud to back down.”