LowKickMMA.com
Home UFC News Mark Hunt: It’s A Matter Of Time Before ‘Stylebender’ Speaks Out On... 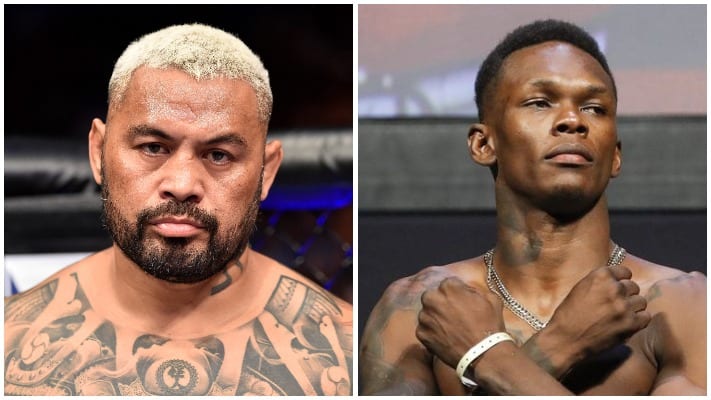 Former heavyweight contender Mark Hunt believes it’s a matter of time before middleweight king Israel Adesanya begins speaking out about being underpaid by the UFC.

Hunt is currently suing the UFC who he accused of conspiring with Brock Lesnar to conceal his return to MMA and skip over the mandatory United States Anti-Doping Agency (USADA) testing period. Lesnar went on to defeat Mark Hunt by unanimous decision but later tested positive for performance-enhancing drugs.

Prior to his troubles with the UFC, Hunt actually recommended they sign Israel Adesanya who has since gone on the become one of the biggest stars in MMA.

“I know Izzy, and I know all the CKB boys,” Hunt told Submission Radio. “And like I said, he’s doing good things in the sport and I think he’s great. And I always knew he’s gonna get there, cause I did talk to Dana about him a long, long time ago before he actually got signed.”

“I told Dana, I said, there’s this guy, he’s a great fighter, he’s amazing, I’ve seen him do kickboxing. I mean, even before they were trying to get him. And I knew he was world class already because I’ve seen him. A friend of mine took me to see him do a kickboxing fight in New Zealand. And like I said, I did message Dana a long time ago about Izzy and how talented this kid was. His mind for fighting is amazing. He’s done boxing, kickboxing, and I knew he was the new era in fighting. And I messaged Dana, and he wouldn’t have a bar of it. And look, three or four, five years later down the track, Izzy’s headlining, he’s the new guy.”

The UFC have had a tough 2020 in terms of fighter relations, with long-time 205lb champion Jon Jones and fan favourite Jorge Masvidal publicly complaining about their pay. Hunt suspects it won’t be long until Adesanya joins them by speaking out in an effort to get his fair share.

“It will only take time until he realizes that money and the revenue share should be talked about,” Hunt said. And that’s coming. So, what do you think they’re gonna do? They’re gonna do the same thing they did with Jones. ‘How do we keep this guy quiet? How do we shut him up? We need him to lose. How do they do these things?’ They’re not dumb. These people making these kinds of money can see all this and realize what’s happening. So, why would anyone want to change what’s happening already, when they can be paid fruitfully off all the blood and sweat of these fighters? So, it’s just a matter of time before Izzy starts speaking up about pay and all of that. Otherwise, they’re going to have to look after him properly.”

“Making these title things. I just don’t feel like he’s making the type of money he should be making. You know, five million dollars is a lot of money, but he’s up in the bracket of 20-30 million dollars cause of all the people watching him.”

Do you think Mark Hunt is right? Will Israel Adesanya soon start to complain about his pay?