LowKickMMA.com
Home UFC News Leon Edwards Labels Jorge Masvidal A “P*ssy” For Pulling Out Of Their... 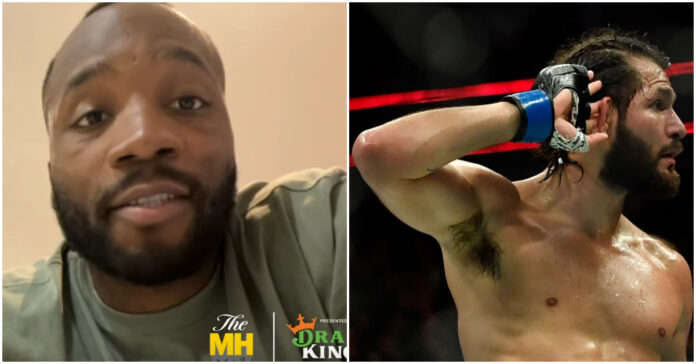 The second-ranked contender at welterweight is set to finally get his shot at the reigning UFC Pound-for-Pound king Kamaru Usman at UFC 278. Edwards has gone undefeated in his last ten bouts with his most recent win coming over Nate Diaz last June.

He was scheduled to face Jorge Masvidal at UFC 269 in December 2021 but the fight was canceled after ‘Gamebred’ withdrew due to an injury.

In a recent appearance on The MMA Hour with Ariel Helwani, Leon Edwards shared his thoughts on Masvidal pulling out of their contest. ‘Rocky’ labeled the Miami-native a “p*ssy” for not going through with the event, and still has a sense of resentment from the infamous ‘3 piece and a soda’ incident.

“I thought, you know p*ssy,” Edwards said. “I had a feeling he’d have done it, you know. I don’t think he wants to fight, and I’ve always said that he doesn’t want to fight me. Lastly, I would’ve loved for that fight to have happened.”

“I’ll give him the title shot, that’d be a fantastic fight in the UK. Bring it back to the O2 where it happened, for the title. That’s the one to do next, that’s the best.”

Edwards expressed his wish to win the title and then defend it in his home country of the UK against Masvidal.

“If that happens in the UK, sure. Like I said my dream scenario would be to bring it back to London and to headline London,” Edwards said. “So I want to come back home and then do it, so yeah.”

Edwards referenced the time Masvidal sucker-punched him in the face at UFC Fight Night in London back in 2019. Following an incredible knockout win over Darren Till, Masvidal got into the backstage brawl with Edwards and their rivalry has only heated since.

Would you like to see Leon Edwards fight Jorge Masvidal?