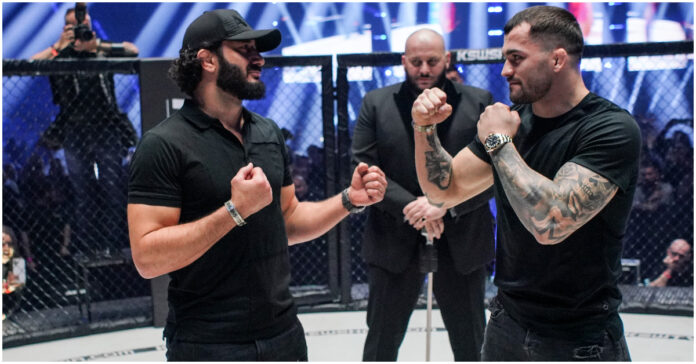 KSW will be ending 2021 with a bang after the promotion officially confirmed the main and co-main events of KSW 65, which is set to take place on December 18 at the Gliwice Arena in Gliwice, Poland.

Headlining the card will be a mouth-watering champ vs. champ clash between KSW’s middleweight king Mamed Khalidov and welterweight champion, Roberto Soldic. The 26-year-old Soldic is riding a six-fight winning streak and will be looking to take Khalidov’s crown when the pair face off in their middleweight bout.

The Croatian fighter dipped his toe into the middleweight division previously when he took on and defeated Michał Materla at KSW 56. However, taking on Khalidov, one of the biggest names in KSW is an altogether different proposition.

The 41-year-old recaptured his middleweight title with a stunning first-round KO of Scott Askham at KSW 55. Khalidov unleashed a mid-air switch kick which caught Askham flush on his jaw, instantly ending his night. It was the type of performance that reminded everyone why he is one of the most exciting middleweights in MMA.

In Soldic, Khalidov will square off against a known KO artist, with 90% of his wins coming via stoppage. The bout looks set to be one of those encounters where fireworks are almost guaranteed.

KSW 65 will be available to watch online at www.KSWTV.com. There will be more announcements about the card in the coming weeks.

Will you be watching KSW 65?