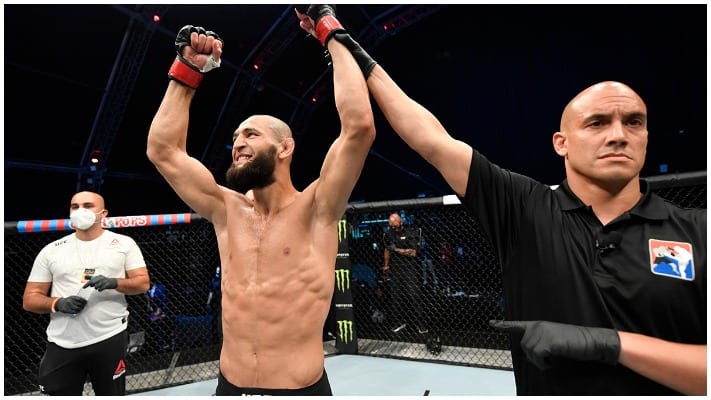 Chimaev took to social media yesterday to let his fans know he is still looking for an opponent while simultaneously outing those who do not want to step up and face him, he wrote.

“I just want to let my fans know and the people who support me the ufc offer me wonder boy and he turned it down at 170 and also chris Weidman at 185 who also turned it down. I’m coming for everyone.”

The undefeated Swedish fighter burst onto the scene earlier this year at ‘Fight Island’. Chimaev made his promotional debut against John Phillips at middleweight, dominating the fight before getting a second-round submission win. Ten days later he was back inside the Octagon, this time competing at welterweight against UFC newcomer Rhys McKee. Chimaev looked even more impressive in that fight, utilizing his elite-level wrestling to smother McKee on the floor and forced the first-round stoppage.

Chimaev was back in action for his third bout with the company at UFC Fight Night: Covington vs. Woodley on September 19. His opponent was long-time middleweight contender Gerald Meerschaert who was supposed to provide Chimaev with his toughest test to date. The 26-year-old clearly didn’t get the memo and proceeded to KO Meerschaert with the first punch of the fight.

Soon after his latest win, Chimaev announced he is set to headline an event later this year. Ever since he has been trying to secure an opponent willing to fight him at 170 or 185lbs.  So far, it’s proving tough as the upper echelon guys with rankings by their names are reluctant to step in against Chimaev who with all due respect has not earned his position among the best at either weight class, not yet anyway.

Who do you want to see Khamzat Chimaev fight next?