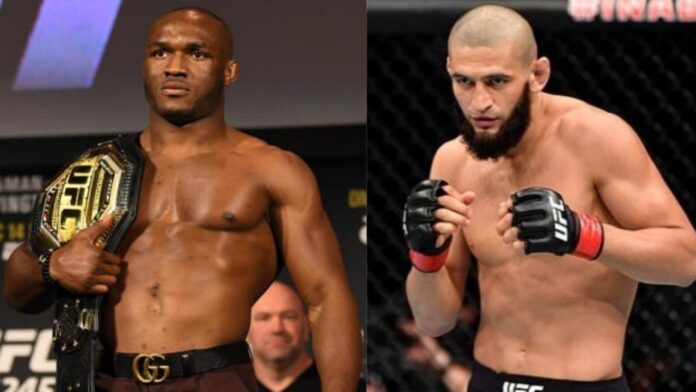 Skyrocketing welterweight contender Khamzat Chimaev took to Twitter to show his displeasure with 170lb champion Kamaru Usman’s claims that he would KO the pound for pound best boxer on the planet in Canelo Alvarez.

The UFC’s pound-for-pound No.1 Usman is pushing for a fight with undisputed super middleweight champion Alvarez in September, something that seems unlikely to happen due to Usman’s contract with the UFC and Canelo’s desire to cement his legacy in boxing before taking novelty fights.

Usman wants to defend his welterweight title against Leon Edwards in the summer and cross over to boxing to face Alvarez on Mexican Independence day.

Usman’s manager, Ali Abdelaziz seems to think the champ could knock out Alvarez in 3 rounds.

While most fans and pundits believe this fight may not even be close, Usman and his team believe it could one of the bigger fights the world can showcase.

“I understand that he gets paid, he makes money. But fighting me is the biggest payday he’s ever gonna make. We talking nine figures, for sure.”

“Absolutely I see myself winning that fight. That’s the thing that a lot of people fail to realize. A lot of people, because they think they can’t do something, they try to put that upon you. ‘Oh, you can’t do that. It can’t be done.’”

It’s hard to imagine Dana White letting his pound-for-pound champion step inside the boxing ring with Canelo Alvarez, but in this sport, you can never say never.

Do you agree with Khamzat Chimaev’s take on Kamaru Usman’s boxing skills?