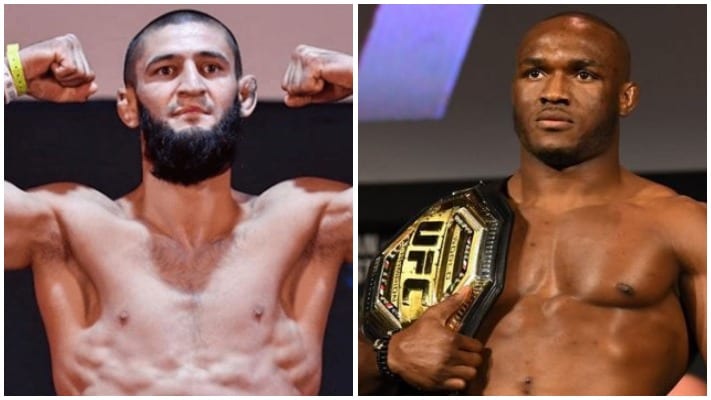 Khamzat Chimaev has taken us all by storm over the last two weeks, winning, and finishing two fights in just ten days, setting a UFC record. Now he wants to fight again at UFC 252 on August 15, and UFC President Dana White isn’t opposed to it, he’s already his biggest fan.

White caught up with Brett Okamoto yesterday on ESPN MMA to discuss his thoughts on Chimaev. Okamoto asked White after it was all said and done who had the standout performance at UFC Fight Island. White immediately responded:

“Khamzat! I mean, the guy is so dominant, so confident, (he) wants to continue to fight every weekend. I love it, I love guys with that mentality. I love how talented this guy is. You know, we threw the hottest prospect out of the UK at him, and that kid is a badass, legit, great fighter. And he made it look like he didn’t belong there.”

Okamoto then asked him if he had any interactions himself with Chimaev on Fight Island:

“Yeah yeah, I mean, he said he wanted to fight, and I said done. I’ll make it happen. He wants to fight now again in August, and I’m gonna get him what he wants.” Okamoto then asked him if he was going to get him a fight in August, White replied, “hell yes I am.”

White went on to speak on what could be next for Chimaev:

“That’s what we’re trying to figure out. We were sitting in here this morning trying to figure out what we think is next. You know, you ask this kid, he’s ready to fight Usman, you know what I mean?” Okamoto added, “I’m kind of ready to see it”, White continued, “is he ready for Usman? The way he looks, who knows, maybe.

In his two UFC fights, Chimaev has out-landed his opponents 192-2, and scored three takedowns, one for each round he started. He wants to be champion of the welterweight and middleweight divisions as well, and thinks it’ll take one or two years to challenge for his first one. There have been many comparisons between himself and UFC Lightweight Champion Khabib Nurmagomedov, and honestly, he’s more dominant at 8-0 than Nurmagomedov was at 20-0. Forget the sky, there really is no limit for this kids potential.

What do you think should be next for Khamzat Chimaev?