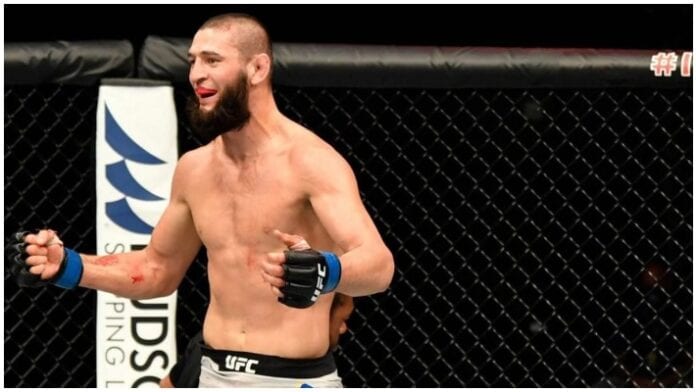 Earlier this week, the Swedish prospect claimed he travelled to Ireland to beat up McGregor after the MMA superstar mocked UFC lightweight champion Khabib Nurmagomedov during the bitter build up to their UFC 229 fight. Chimaev was detained by local authorities before he was able to get anywhere near McGregor.

“True story I flew to Ireland before Khabib fight to beat up Conor mcgregor for what he said about our honor but they would not let me in the country. You need big security @TheNotoriousMMA weak man,” Chimaev wrote on social media.

He continued his assault on McGregor by posting the following image.

Chimaev has made UFC history during his brief stint with the promotion. In his two UFC fights, which took place within 10 days of each other. Chimaev has out-landed his opponents 192-2, and scored three takedowns, one for each round he started. Since then he has been calling out the biggest names in the sports including McGregor and welterweight champion, Kamaru Usman.

McGregor is currently retired from the sport. He walked away from MMA for the third time and four years after becoming frustrated with the lack of fights available to him. ’Notorious’ last fought in January when he beat Donald ‘Cowboy’ Cerrone inside one minute at UFC 246.

Do you like that Khamzat Chimaev is going straight after the biggest fighters in MMA?