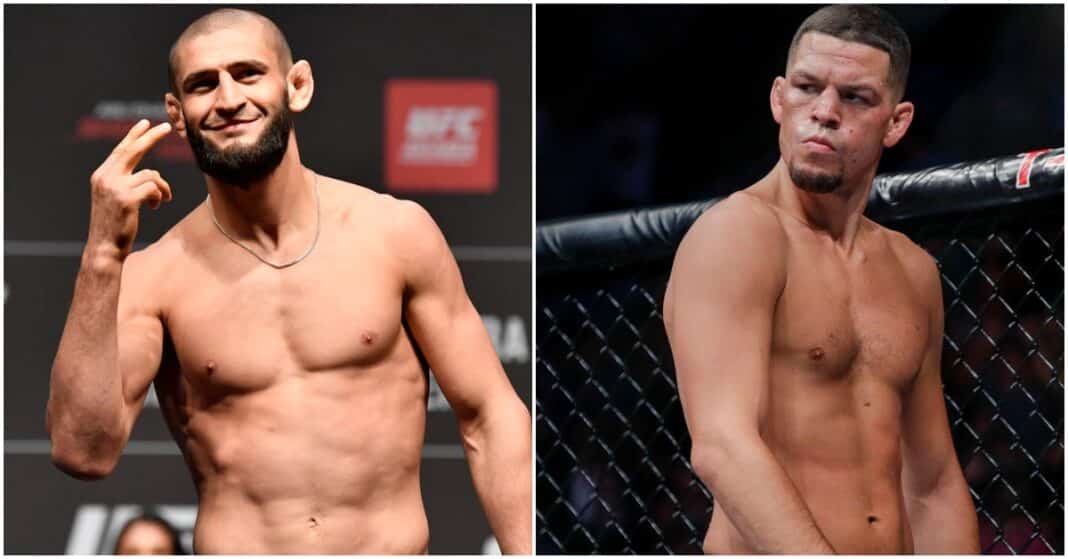 Nate Diaz recently categorically ruled himself out of a fight with “rookie” Khamzat Chimaev and claimed it was disrespectful to suggest he faces off against someone with just four fights in the UFC.

“They’re coming at me with (Chimaev) and I’m like, ‘Hold on, don’t disrespect me like that, trying to offer me a fight with a rookie,’” Diaz told TMZ Sports. “I’m cool. You got four fights in the UFC. Don’t even talk my name. There are levels to this and I don’t even want to hear his name.”

Khamzat Chimaev Got Wind Of Diaz’s Comments & Hit Back

The 27-year-old didn’t take kindly to Diaz dismissing him and subsequently jumped on social media to rip the UFC fan favourite.

“you are the easiest money for me thin @NateDiaz209,” Chiamev wrote on Twitter.

“You fake gangster @NateDiaz209 and I don’t care who to fight i’m coming for everybody, where are you all the gangsters and kings ? i’m here to kill everyone i’m the king here i’m a gangster here,” Chimaev added.

The Swedish fighter then turned his attention to Nick Diaz, he wrote.

“say hello to your older brother, tell him not to be afraid of me, I don’t beat old people, he knows what I mean, in Vegas I just wanted to say hello well, poor man ran away @NateDiaz209”

Chimaev ended his Twitter tirade by posting a cartoon of a bulldozer scooping up chickens and a meme of him eating a heart which was directed at Colby Covington.

Is Khamzat Chimaev vs. Nate Diaz a fight that interests you?