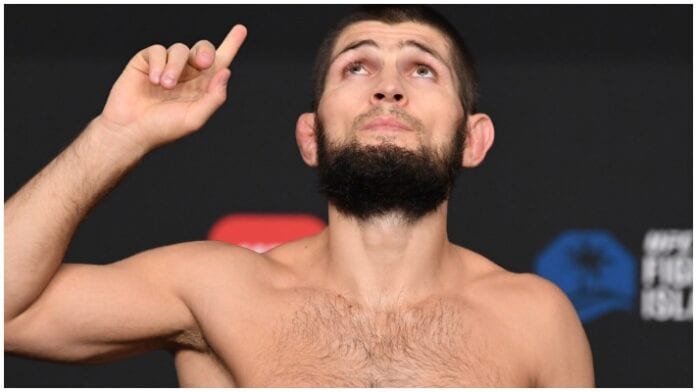 If the newly released video of Khabib Nurmagomedov‘s weight cut ahead of UFC 254 is to go by, it looks like the former lightweight champ’s final fight almost didn’t happen.

Nurmagomedov has always been big for the lightweight division, and it’s long been known that weight cuts have been difficult for him. Despite that, Nurmagomedov only missed weight once in his 29 pro fights, tipping the scales before his fight against Abel Trujillo at UFC 160. In a video released on his YouTube channel, The Eagle gave his fans an inside glimpse of just how much work goes in to making sure he hits the 155 pound mark.

The day before his fight against Justin Gaethje at UFC 254, Nurmagomedov can be seen repeatedly dropping to the ground from pure exhaustion after running and cycling. His coaches and teammates are shown helping him stand up and even rolling over. Throughout the grueling video, everyone is still somehow able to stay relatively calm about the situation.

“We are not used to (seeing) him in this state, but it’s fine,” one of his coaches says to the camera. “Everything will be how Allah wants. Most important is to make weight and he will finish him.”

“Last day, last days of weight cut are usually difficult,” another member of Nurmagomedov’s team says. “It’s always like that. No matter how prepared you are, last day is very difficult. We did not do evening training, decided to save power, now it’s morning training.”

Weight cuts have been a contentious sticking point for MMA fans for years. Many high-profile fights have been called off due to a fighters inability to make the limit. We’ve also seen fighters hospitalized due to weight cuts gone wrong, and in some extreme cases, even pass away. The cries for additional weight classes have grown especially louder in the last year or so, but UFC president Dana White has always been opposed to the idea.

Nurmagomedov was, of course, able to make the lightweight limit without medical assistance, but not without controversy. Even after the intense workout to slim down, he was the first one on the scales. After initially weighing in at 155.5 pounds, Nurmagomedov tried again with the help of a towel. The official manning the scale was quick to call out 155, though many felt the scale didn’t have time to properly set.

Despite the difficult weight cut, the weigh-in controversy and the recent passing of his father, Nurmagomedov was able to overcome it all and stop Gaethje in the second round. He has since retired and bought his own MMA promotion, which he hopes will serve as a launching pad for future UFC champions careers. White has maintained that he believes the former champion will return to the octagon to run his record to 30-0. But now being able to see first-hand what Nurmagomedov went through before each fight, it’s easy to see why he’d be perfectly fine staying out of the sport for good.

Does this video change your mind about a Khabib Nurmagomedov comeback? Let us know!