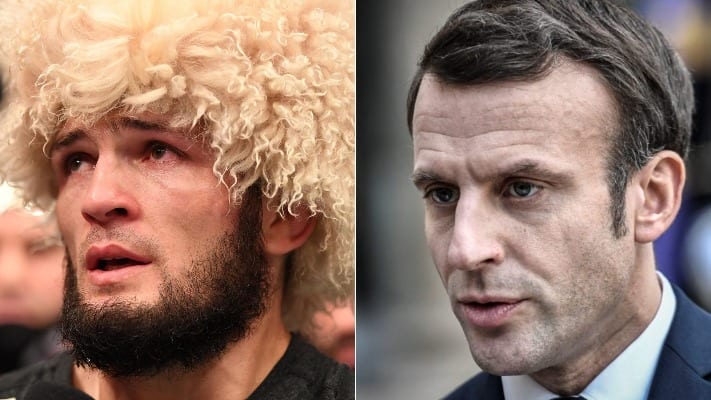 Recently retired UFC fighter Khabib Nurmagomedov has gone on the offensive against the French leader, going so far as to say, “May the Almighty disfigure the face of this creature,” following Macron’s comments towards Islam.

The comments from the ex-fighter come after the French president gave a speech in which he said that “Islam is a religion which is experiencing a crisis today, all around the world.” He also called to “free Islam in France from foreign influences. The statements have led to a number of protests all around the world.

The day after Macron’s speech, a teacher, Samuel Paty, was beheaded after showing his students cartoons of the Prophet Muhammad. The assailant was later killed in a confrontation with police. Following the attack, Macron announced a number plans which he hopes will promote what he calls an “Islam of Enlightenment.”

All of this has led to Nurmagomedov posting his thoughts about Macron’s words on Instagram, and the former champion pulled no punches.

The post features Macron’s face with a boot print on it, and includes a strongly worded message from Nurmagomedov and a quote from the Quran. It was orignally written in Russian and Arabic, and later translated by the Independent.

“May the Almighty disfigure the face of this creature and all its followers, who, under the slogan of freedom of speech, offend the feelings of more than one and a half billion Muslim believers,” Nurmagomedov wrote. “May the Almighty humiliate them in this life, and in the next. Allah is quick in calculation and you will see it.”

“We are Muslims, we love our Prophet Muhammad (peace and blessings of Allah be upon him) more than our mothers, fathers, children, wives and all other people close to our hearts. Believe me, these provocations will come back to them, the end is always for the God-fearing.”

Nurmagomedov also included Quran verse 33:57, which reads,  “Indeed, those who revile Allah and His Messenger, Allah cursed in this world and in the Hereafter and prepared for them humiliating torments.”

Nurmagomedov may be retired from MMA, but he has certainly been keeping himself busy outside of the octagon. Fans of his may not have to solely get their fix off his social media accounts for much longer, though. UFC president Dana White has hinted that Khabib could come back for one more fight to push his record to 30-0.

What do you think about Khabib Nurmagomedov’s comments? Let us know!