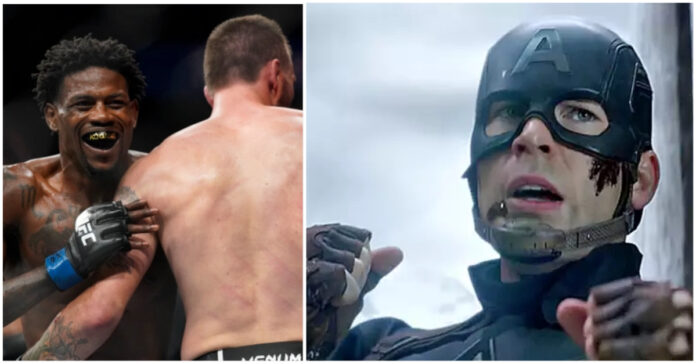 This past Saturday, Holland made his second walk to the cage as a welterweight against Tim Means at UFC Austin. Holland put in an impressive performance to come out on top by finishing Means in the second round via submission (d’arce choke).

‘Trailblazer’ had built a reputation for himself as a trash talker when he competed in the middleweight division. While he toned down the talk in favor of more fighting, there were some interesting words exchanged inside the cage.

During the UFC Post Show for ESPN MMA, Kevin Holland was asked if he was surprised by anything Means did. ‘Trailblazer’ shared that the talking was unexpected and revealed some words he exchanged with his opponent inside the octagon.

“His talking,” Holland said. “Just good, respectful talk back-and-forth. I had threw a sidekick to the leg but I told him I was going to try and keep it off the knee and he said, ‘I agree. Let’s keep ’em off the knee.’

“So, I was like man, Tim is so game this is wonderful. I was just in there having a great time with Tim. OG, veteran, somebody like him, you just can’t put nothing past him. I felt myself getting a little off-balanced a couple of times doing the thing I was supposed to do and I had to remember like, ‘correct yourself because Tim will take you out if you don’t.'”

Following the fight, Holland called out Sean Brady for his next outing. He shared that it was Brady who asked for him and that the matchmakers had informed him of Brady’s callout prior to his co-main event fight.

Do you want to see Kevin Holland fight Sean Brady next?